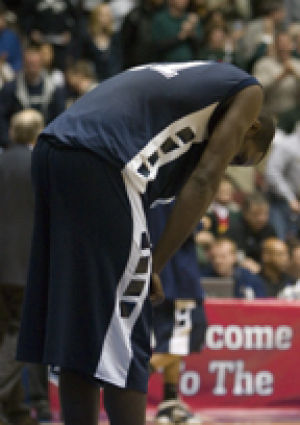 With 11 minutes to play in the MIAA tournament semifinals, it looked like Washburn was well on its way to the championship, with an automatic NCAA tournament bid on the line.

The Bods had the lead for most of the game against No. 2 seed Northwest Missouri State and were up by as many as nine before the Bearcats slowly chipped away and went ahead by one with 5:43 remaining. NWMSU (22-7) came away with a 50-49 win, but the two games WU (18-11) played in Kansas City were some of their best of the season.

The day before, the No. 6-seeded Bods upset No. 3 seed Central Missouri (18-10) 79-68 to extend their tournament lives longer than most expected and earn a spot in the MIAA’s second round.

“We were confident going into it,” said guard Andrew Meile. “Every team in this tournament has a great chance of winning. There’s no favorites down here. It’s just whoever’s able to step up and make big plays.”

Nobody made plays bigger than Meile’s in the tournament’s opening round. With 23 points and a career-high 10 rebounds, the senior got his first double-double in his 113th game as an Ichabod. His five 3-pointers helped WU shoot 58 percent and outscore UCM by 17 in the second half.

“It was an advantage for us because we just played them a week ago and lost,” said coach Bob Chipman. “So there was a little bit of a revenge factor.”

Meile opened the game with a 3, but UCM led for all but the first and last minutes of the first half. The early 3-0 WU lead turned into a deficit of nine just seven minutes into the game.

WU then took the momentum with two 3-pointers and a Kyle Snyder dunk, cutting the lead to one. The Bods stayed within two possessions for the next eight minutes before Meile evened the score with a pair of 3-pointers.

“We had a little bit of a rocky start,” said Chipman. “But once [Meile] and [Snyder] got going, we started playing better.”

Mario Scott hit his second 3 of the game for WU to regain the lead 34-31, an advantage they would retain for the final 20 minutes. The two-point halftime lead grew to eight within three minutes and extended to 16 at the three-minute mark.

As usual, any combination of two or three players can step up for the Bods. But in this game, junior transfer James Williams finally added his name to the list of players who can make an impact in big-game situations.

“I really appreciate [Williams] hanging in there,” said Chipman. “He had such a tough February and he puts so much pressure on himself, but we knew that the floodgates would open once he hit that first 3, and that’s what happened.”

Williams, expected to be one of the Bods’ highest scorers this season, lived up to those expectations when it mattered most. He hit all three of his second half 3-point attempts on the way to a career-high 13-point game.

“He started looking to shoot it and really think it was going in,” said Chipman. “It’s the James Williams we thought we’d get all along. He and [Darnell Kimble] took over for a stretch of the game in the second half, and they both played extremely well.”

Kimble matched Williams’ 13-point total, another case of a less-heralded player stepping up for the Bods. The unexpected scoring, along with Meile’s unlikely game-high rebounding numbers, were enough for the Bods to coast in to the semifinals.

While running down the final seconds of the clock Scott waved goodbye to the UCM fans, some of whom responded with middle fingers.

The momentum continued into the beginning of WU’s second tournament game, as it was senior Grant Hargett’s turn to hit a game-opening 3-pointer. The Bods piled onto their early lead, going up by nine three different times in the first half, but knew NWMSU would fight back from a six-point halftime deficit.

“It’s just another hard-fought Northwest-Washburn game,” said Chipman. “Beating them three times in one year is like trying to climb Mount Everest. They weren’t going to go away.”

NWMSU hit its shots early in the second half, but the Bods still held on to a six-point lead with eight minutes to play. Bearcat guard Mose Howard, playing for the first time in months, hit a three to complete a 7-0 NWMSU run and take a 45-44 lead.

“That was huge for our momentum,” said Bearcats teammate Hunter Henry. “Seeing Mose work all season in the weight room, trying to get back, and then hitting that shot was huge. All the fans went crazy. That was big for us.”

NWMSU supporters made up a majority of the 1,811 fans in attendance and were waiting for a reason to erupt. Once Howard’s 3 went in Bearcat fans took over Municipal Auditorium, a feat that was easily accomplished considering WU’s student section contained nothing more than senior citizens, a handful of band members and four cheerleaders.

“We got a little unnerved,” said Chipman. “When you’re ahead you give the other team a chance to come after you. Unfortunately, it’s Northwest and they’re physical to begin with. They just took us out of our game in the last six minutes.”

The Bearcats outscored WU 12-6 in the last 8:10, erasing a lead the Bods worked most of the game to build.

“I missed a couple shots in the second half that I could’ve made but that’s the way it goes,” said Meile. “We would’ve loved to be on the other side of it but Coach told us it would be hard to beat a team three times. They proved that tonight by stepping up and hitting big shots.”

Meile had eight points, Hargett added 10, Snyder scored two and Brady Sisk went scoreless in their final games as Ichabods. Although the four seniors know the path was cleared for an MIAA championship and an NCAA tournament trip, they realize the team exceeded expectations by making it to the conference’s semifinals.

“The ball just didn’t quite bounce our way at the end,” said Meile. “We played well in both games, and at least that leaves a good taste in our mouths.”