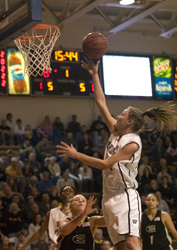 She shoots, she scores Jessica Mainz, junior, makes a basket Feb. 23 against Emporia State. Though the Lady Blues won that game 78-52, their season ended Wednesday.

The Lady Blues’ season ended sooner than they had hoped with an 85-80 loss to South Dakota Wednesday.

However, the one game Washburn played in Kearney, Neb., site of the NCAA tournament Elite Eight, lasted longer than either team had anticipated. Regulation and overtime weren’t enough to decide who would advance to the national semifinals, and it wasn’t until the last seconds of double overtime that USD put the game out of reach.

WU won three games to make it to the tournament’s biggest stage, but ended the season three wins short of a national title after falling to the

No. 3 Coyotes (33-2), who won the North Central Regional championship and their last 29 games.

Senior Corkey Stiger hit a 3-pointer to send the game into overtime and junior Jessica Mainz did the same to extend the game five more minutes. The Coyotes then made big shots of their own, going 6 of 6 from the free-throw line in the final 15 seconds of double overtime.

“We both made big plays,” said coach Ron McHenry. “They just made a couple more than us in the end, and that’s why they were able to beat us in double overtime.”

The game was close in the end, but in the first half nothing was going WU’s way. The Blues were down 10 less than a minute before halftime but held USD scoreless for the next 3:43 and used a 12-0 run to go ahead by two. The lead grew to six before the Coyotes answered with a run of their own to even the score yet again, one of 11 times the score was tied in regulation alone.

“It felt like we were always coming from behind,” said McHenry. “It was a back-and-forth game, but we had to hit the big shots to stay even with them.”

McHenry called a time-out after USD made a lay up to take a 61-57 lead with 1:20 to play in the second half. Neither team scored for the next minute, until Stiger converted on three straight free throws to close the gap to one after being fouled.

“They had us on the ropes a couple of times and we could have shut it down, but we battled back,” said McHenry. “It showed the character of this team and why we were in the Elite Eight.”

WU had to foul with the clock running down, and needed another three after two Coyote free throws made it 63-60 with 19 seconds remaining. Three seconds later, Stiger tied the game with three of her career-high 31 points. USD missed two potential game-winners in the final five seconds of regulation, and the teams headed into overtime with the score tied at 63.

The Coyotes built up a three-point lead three different times in the first overtime, and the Blues answered with a 3-pointer each time to even the score. The first two were Stiger’s and the third came from Mainz with 28 seconds remaining. Senior Amanda Holmes got a block and rebound on the defensive end to ensure the careers of her and Stiger’s would last five minutes longer.

“Our seniors were big for us in this game,” said forward Renata Germano. “They’ve played well all season, but nobody wanted their careers to be over now.”

Neither team could get on the board for the first half of the second overtime until USD scored on a layup. Holmes then sank a pair of free throws to reach her final game total of 10 points and 11 rebounds.

The score was tied once again temporarily, but the Blues couldn’t convert from the field in double overtime until the final six seconds, when Janice Bright hit a three to trim the WU deficit from six to three. USD’s perfect free-throw shooting down the stretch, combined with WU’s 1-for-5 shooting and three turnovers in the second overtime, made it impossible for the Lady Blues to come up with last-minute heroics in the final period.

“We had a couple opportunities at the start of the second overtime when we had the ball and they missed a few shots,” said McHenry. “We couldn’t get the ball where we needed to. We just ended up on the short end of the stick.”

The Coyotes sank both of their free throws on each of the three times they were fouled in the final 13 seconds to eliminate any chance WU had of forcing triple overtime. USD went on to beat the only undefeated team in the nation the next night and then blew a 12-point lead to Northern Kentucky in the national championship Saturday, leaving the Blues to wonder how they would have fared, had they edged the Coyotes in the Elite Eight.

“I’m happy with the way we played against a really good team,” said Germano. “But making it this far is bittersweet. We know we have a lot of good players here and we felt like we could have won the championship.”