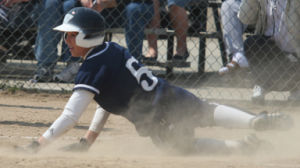 The Washburn Lady Blues softball team is riding its longest break of the season, as it hasn’t played a game in the last nine days because of the weather.

The Washburn women have had seven games canceled because of precipitation and cold weather in the last nine days. Last Wednesday’s doubleheader versus Emporia State was rained out and rescheduled for 3 p.m. Sunday, April 27, in Emporia. The other five games were all scheduled this past weekend as part of the Northwest Missouri Tournament in Maryville, Mo., and were cancelled due to wet fields.

“Originally it was because of rain, but then they also had snow that made the field really wet,” said sophomore Megan Kimerer.

These games are unlikely to be rescheduled.

“Tournaments like these are usually not made up because it’s so hard to get them rescheduled this late in the season,” said senior Kelly Swygert.

The weather has also taken a toll on how much the Washburn softball team gets to practice.

“We haven’t been outside at all the last couple of days,” said Swygert.

“We won our very last game against a tough Central Missouri team, and that kind of gave us confidence,” said Kimerer. “Even though we lost our first three we were able to save the weekend, in a way, with that last win.”

For the season the Lady Blues are 22-20 and 4-4 in the MIAA, which puts them tied for fourth in the conference standings. Washburn is one of the top teams in the North Central Region ranking.

“We’re doing really well in region,” said Swygert. “Right now, we’re sitting at seventh in the region and you have to be in the top eight to advance in the postseason.”

The Washburn softball team is back in action at 2 p.m. Tuesday with a doubleheader at Northwest Missouri in Maryville. The Lady Blues have won two of the last three against the Bearcats, including a MIAA tournament win last May. Currently NWMSU is tied in conference with the Lady Blues at 4-4.

“They’re a tough team. They’ve split with a couple of [conference] teams,” said Kimerer. “We’re just going to have to go out there and play our best.”

The Lady Blues will finish off play for the week at 3 p.m. Wednesday when they come home to take on Pittsburg State. They’ll try to improve their record in Topeka to 7-3. Other than the one-run loss earlier this season to the Gorillas in a non-conference game, the Lady Blues have dominated the series in recent history, winning seven in a row dating back to 2006. PSU is 5-2 in the MIAA, good for third place behind Central Missouri and Emporia State.

“The two games this week are really important,” said Swygert. “Any game within the conference, especially this late in the season, are must-wins.”