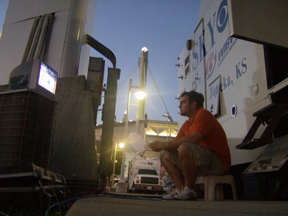 March-ing forward Blake Kresge sits just a few hundred feet away from the Kansas-Memphis NCAA Championship game, watching it on a 15-inch TV next to WIBW-TV's satellite vehicle. Kresge had press credentials for the first two rounds in Omaha, Neb., and access to the players.

One Washburn student had the experience of a lifetime this year as the University of Kansas basketball team won the national championship.

Kresge is a junior at Washburn University and a video journalist for WIBW-TV in Topeka. In late March he was asked to travel to Omaha, Neb., to cover the NCAA tournament games there.

Kresge was a credentialed member of the press in Omaha. He had court access before games and locker room access to players after the games.

“It was incredible,” said Kresge. “I got to cover both KU and K-State in Omaha.”

When KU advanced to tournament play in Detroit, Kresge was not selected to travel as a photographer for the event. He was disappointed but not heartbroken.

“I felt lucky to have been able to cover even part of the tournament,” said Kresge. “It was something I had never dreamed of.”

Kresge started working at WIBW-TV when he was 18 years old. Now, at age 19, his opportunities as a young journalist seemed to be growing exponentially. When KU advanced to play in San Antonio as part of the Final Four, Kresge was again selected as a member of the traveling crew. He wasn’t credentialed this time, but as he stood behind a camera outside the arena following KU’s win against North Carolina, he knew he was part of a huge moment in sports history.

“This is a big deal,” said Mark Ewing, sports director at WIBW-TV. “You’ll never forget an experience like this.”

Kresge watched the championship game on a 15-inch television in the parking lot of the Alamodome as it was played out only few hundred feet away inside.

“I never made it in to see the game in person, but I was there,” said Kresge. “I’ll never forget that.”