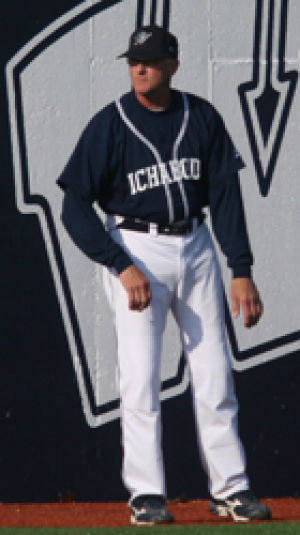 The Ichabods entered the week hoping to win their series against Northwest Missouri State and Missouri Western State and inch closer to the fourth-place spot MWSU currently holds in the MIAA standings.

After losing three of the first four games against NWMSU, the Bods’ (11-24 overall, 7-19 in MIAA play) losing streak hit eight games, and they had given up at least seven runs in eight of the last 10 games.

“That hurt, losing those games to Northwest because they were holding the spot where we wanted to be,” said second baseman Wes Joy.

When the series against NWMSU (22-18, 12-12) began the Bearcats were in fourth, the all-important spot in the standings because only the top four in the MIAA advance to the conference tournament. The Bods couldn’t capitalize on a three-run home run from Dane Simoneau in game one, and gave up a late lead to lose 8-7.

While it may be difficult to lose close games it doesn’t hurt nearly as bad as an 18-0 loss, which is what the Bods suffered through in the second game of the doubleheader. Starter Curtis Hamilton gave up 10 earned runs in the three innings he pitched as the Bearcats racked up 17 hits and three home runs.

“Our pitching had been good for the most part this season,” said pitcher Zach Engelken. “But that game was just one of the worst we could have played, I think. It always hurts your morale and self-esteem a little to lose games so badly like that.”

A week ago the Bods were just a few points away from having the conference’s best ERA, but the latest losses dropped the team from second to fifth in the MIAA team ERA rankings. An 8-0 loss on the following day didn’t help the batting or pitching numbers and took a toll on the Bods emotionally as well.

“It’s hard on all of us,” said Joy. “You feel like you’re competitive with these teams we’re playing, but losing eight in a row is just difficult. We weren’t too far back in the standings and we’ve played a lot of close games, but we just haven’t been getting anything to go our way.”

The Bods’ luck changed briefly in the final game against NWMSU as Washburn’s offense finally woke up in an 18-4 win. The game was tied 4-4 in the sixth inning before WU suddenly exploded offensively with 11 runs in the inning. Every Bod in the starting lineup had at least one run and RBI, and Engelken picked up the win after allowing four runs in six innings.

“We were feeling pretty good after that win,” said Engelken. “A lot of times, you just have to get out of a slump and regain your confidence. That can make a huge difference in baseball, just having the confidence to get that big hit or make a big pitch.”

The momentum carried into the series against Rockhurst, and the Bods won in an entirely different fashion, picking up a 1-0 win in a rare pitcher’s duel. Tyler Blankenship drove in Luis Beltran Lopez for the game’s only score, and Bryan Stroth pitched a complete game shutout in game one of the doubleheader.

“[Stroth] pitched a great game for us,” said Engelken. “It’s nice to watch a close battle between pitchers like that, especially when it’s your team that comes out on top.”

Both offenses started clicking in game two, but the Bods fell 12-7. After rallying from a 4-0 deficit with six third-inning runs, the Bods gave up five to the Hawks in the game’s sixth inning to end a modest two-game winning streak.

“They aren’t that great of a team,” said Joy. “We beat them earlier in the season, so we hoped to do the same this time around.”

The Bods hoped their break from conference opponents would pay off down the stretch, but that wasn’t the case in their first two games against MWSU (17-20, 14-12). The Griffons handed the Bods a pair of losses in Saturday’s doubleheader by the score of 7-2 in game one and 7-1 in game two.

“There wasn’t a lot we could do in either game,” said Engelken, who gave up five runs in game two. “We were playing them close early both times, but we couldn’t hold onto our leads or make the plays to come back in the end.”

The 2-1 lead WU carried into the fifth inning of game one didn’t hold up, and the Griffons knocked in three runs in both the fifth and sixth innings to pull away late. Five unanswered runs from MWSU in game two were enough for the Griffons to shut down the Bods and their lackluster offense and extend WU’s new losing streak to three games.

Losses to MWSU are especially difficult because they separate the Bods from the fourth-place spot the Griffons currently hold. With just 10 conference games remaining, the Bods are now 10 games back from the MIAA tournament’s last spot.

“This isn’t what we expected to do this year,” said Joy. “Obviously, you never anticipate having some of the struggles and losing streaks like we have. Hopefully though, we can end the season on the positive note. We aren’t just going to quit. Winning now might not get us into the tournament, but it can help for next year if we finish strong and get some momentum.”