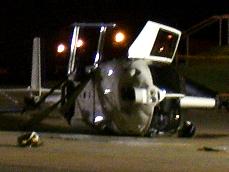 The TPD helicopter clipped a light pole on its way down in making an emergency landing in the Stoffer Science Hall parking lot. The incident occurred about 11 hours after Topeka Mayor Bill Bunten vetoed a resolution for the purchase of a new police helicopter.

A statement made by the Topeka Police Department said a helicopter belonging to the TPD made a hard landing in the north parking lot of Stoffer Science hall around 10:55 p.m. Friday.

Gary Herman, deputy chief with the TPD, said the helicopter was having difficulty staying in the air, and made an emergency landing in the Stoffer parking lot. However, the pilot failed to see a light pole, which the helicopter clipped on the way down. There was no damage to any buildings on campus.

“As far as we can tell the only collateral damage we can see is to a tree,” said Herman, who noted that of the three occupants of the helicopter, only one received minor injuries, and all three are undergoing observation at St. Francis Health Center.

Lenny Ndegwa, junior chemistry major, said he was in his home at 726 Washburn Ave. when heard the sound of the helicopter landing in the parking lot.

“I heard a big boom,” said Ndegwa, who immediately thought that a gunshot had been fired, and the officers were on the scene within two or three minutes of the incident.

Chris Marshall, member of the Delta Chi fraternity and sports writer for the Washburn Review, was inside of his house, located directly east of Varsity Blues, at the time of the event, and said him and other members of his fraternity were notified by Patrick Muenks, fraternity member and Washburn Student Government Association senator.

“We thought there was a fight because there were a bunch of police officers over there,” said Marshall, who said he was notified of the event around 12:10 a.m.

“I didn’t believe it at first,” said Roberts. “I didn’t see it happen, I didn’t hear it happen, but some of my [fraternity] brothers saw it.”

The Washburn Police Department was aware of the event and is working in conjunction with TPD on the incident.