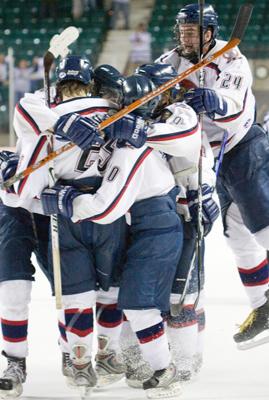 Jubilant Runners The RoadRunners celebrate their 5-3 win Thursday to go up 2-1 in the series. The Runners would lose the next game Friday 3-1, but take game five Sunday 5-4 in overtime.

In a back-and-forth series between the NAHL South Division’s two top teams, it’s fitting that game five could not be settled in regulation. The RoadRunners won games one, three and five to win the postseason division championship and advance to the Robertson Cup finals in St. Louis next week.

A three-team round robin between each division champion will decide the overall NAHL champion for the 2008 season.

The scoring in game five was a microcosm of how the entire series played out: back and forth. In the end, a goal by Randy Swank gave the RoadRunners a 5-4 edge in overtime and another title to add to the team’s long list of accomplishments this season.

Like the previous two games, Fairbanks entered period two with an advantage on the scoreboard. Jendras tied the game at 1-1 with a shorthanded goal before Fairbanks netted two unanswered scores during a three-minute span. With their backs against the wall and facing elimination in yet another 3-1 deficit, the RoadRunners responded when it mattered most.

“We always play well when the times get tough,” said Langer. “Every time our backs are against the wall we have guys step up and get that big play for us.”

In this case, it was Gens who was the playmaker in the second period. His score brought Topeka within one entering the final period of regulation, and kept the hope alive for a trip to the league’s finals. Swank and Matt Hartmann did their best to make that dream a reality, scoring the game’s next two goals back-to-back in a span of less than two minutes.

However, Nick Guran of the Ice Dogs evened the score back up by knocking in a goal with less than four minutes on the clock. It took 13 minutes for a goal to come in the overtime, but Swank’s goal sent the RoadRunners into a state of jubilation and completed the RoadRunners’ transformation from an average team to a first-class organization with 2008 regular season and postseason titles under its belt.

Some of the youngest players on the ice came through like veterans to complete the rally and net Topeka their second win in the series. Eriah Hayes, recently named to the NAHL All-Rookie Team, set up Bryon Paulazzo with the game-tying goal, and 17-year-old Jordan George netted the game-winner with 1:24 remaining in the game. George’s goal gave the RoadRunners their first lead of the game, and Hayes got on the board shortly after by scoring on an empty net to put the game away.

“There was a scrum behind the net,” said George. “I knew [Fairbanks goalkeeper Corey] Reichard was going to come out pretty far, so I shot it low and hoped for a rebound. Fortunately, it went in.”

With the momentum entirely in their favor, the RoadRunners entered game four with the chance to advance to the Robertson Cup Finals in St. Louis. If the satisfaction of victory wasn’t enough, the RoadRunners added another honor to their championship-caliber season, earning the title of NAHL Organization of the Year Friday.

“We’ve worked very hard this year to establish ourselves in a new community,” said Arch Ecker, operations manager. “And we know how hard the 17 other teams in the league are working, so to be acknowledged by the league in this fashion is very gratifying.”

Aside from success in games and winning the regular-season South Division Championship, Topeka was rewarded for the organization’s management and attendance, ranking fourth in the 18-team NAHL and averaging more than 1,500 fans per game.

“The fans are a big part of that award,” said Langer. “They’ve been real supportive and we have some of the most vocal fans in this league. If we’ve ever needed their support, right now is the time.”