Students speak up with silent protest 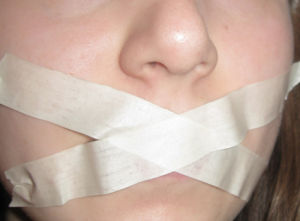 Echoing the nation-wide protest, participants in Washburn’s Day of Silence took a vow of silence to raise awareness of the social isolation, discrimination and hate crimes experienced by LGBT students. The project also aimed at helping make Washburn free of violence and discrimination for everyone.

“After the events, we hope students will be more aware of how different life is for those students and be more supportive to minority groups,” said Kat Conoley, Campus Activities Board director of community and philanthropy events. “We want students to take a stand to help make the campus safer for everyone.”

The concerned students wore T-shirts saying “What will you do to end the silence?” for a whole day. However, the silent part was individualized. Some participants chose to keep silent all day, while others could simply be silent during their lunch times. When the participants were not able to speak for themselves they gave out talking cards that explained what the Day of Silence is and why they protested.

“We’d like people to experience how they want to get out there when they can’t speak for themselves and how oppressive the inability is,” said Resa Boydston, secretary-treasurer of OPEN and a bisexual student herself.

This year the Day of Silence was held in memory of Lawrence King, a 15-year-old student who was shot and killed by a classmate at school in California this February because of his gender expression.

“This just blew my mind. How can people be so hateful and mean to a child?” said Boydston. “I’m not saying that people have to love them [LGBT individuals], but treat them like humans and find a bit of compassion.”

CAB, Learning IN the Community and OPEN sponsored the project this year to declare that no violence and discrimination can be tolerated on campus and Washburn is a community that will take care of its members.

“We want to help LGBT students feel that they are allied, safe and they are surrounded by people who will not tolerate violence and crimes,” said Conoley.

Although only about 25 students joined the activity this year, the organizers are still optimistic that it has the potential to be successful if they do it next year.

“People only need to put down their walls and break down the barriers,” said Boydston. “Ultimately, this event will be successful when there are no more hate crimes.”