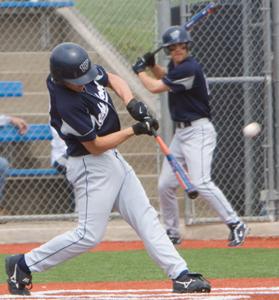 Batting Bod Third baseman Joe Hosey swings at a pitch during Washburn's doubleheader Saturday against Truman State at Falley Field. Hosey belted a triple in game one to drive in the Bods' only run as they lost 3-1. WU won game two 3-1.

Up to this point in the season, Washburn baseball has been less than stellar and remains near the bottom of the MIAA. After being mathematically eliminated from the postseason, however, the Ichabods have played well against top competition.

Entering the last game of a weekend series against fourth-place Missouri Western State, the Bods had a 3-14 record in the month of April. A 13-7 upset over the Mules was the spark WU needed, as they have won four of their last five games.

This week’s schedule started with a non-conference game against the University of Nebraska-Omaha, a team ranked No. 23 in the country and riding an 18-game winning streak. UNO (32-10) was heavily favored, but WU (10-21 overall, 15-26 in MIAA play) had one of their best outings of the season and beat the Mavericks 7-2.

“The mindset’s changed a little,” said second baseman Wes Joy. “We’re going out there with the confidence that we can win. The pressure’s off now, and it’s hard knowing we won’t make the tournament, but now we’ve just been having fun and playing hard, and it’s worked for us in these last few games.”

UNO’s pitchers held the Bods’ batters scoreless for all but two innings, but WU scored four in the second inning and three in the eighth to lock up the first win of the season against a ranked opponent. Pitcher Jake Iverson gave up two runs in the first, but rebounded with five shutout innings. The Bods had 13 hits and blew a 4-2 game wide open when Brian Gorges pounded a hit down the left-field line, driving in two insurance runs late in the game.

Following the back-to-back wins, Truman State came to town for a four-game weekend series. The Bulldogs (5-24, 7-36) are below WU in the standings.

The series started off right with a 14-4 win, and WU was able to take two of the first three games against the Bulldogs, who are last in pitching and batting statistics in the MIAA.

“You know you’re playing well when you can get a run-rule win against somebody,” said pitcher Danny Cook. “It feels good to pitch so effectively, and then obviously our batting was awesome to be able to get up by 10 against them.”

Cook struck out seven and didn’t allow a run through the game’s first six innings. The team had 21 hits total and built a sound 8-0 lead by the end of the third inning. Joy was a single away from hitting for the cycle, and leftfielder Nick Barnes just needed a triple in his 4-for-5 performance.

Both batters’ attempts to accomplish the rare offensive feat were ruined when the 14th WU player crossed home plate in the eighth inning, ending the game because of a 10-run margin. Of course, neither player can complain in a blowout of a conference opponent.

“It’s looking like we’re going to end this season on a good note,” said Joy. “We just knew we had to keep playing hard, even after we dropped all those close games earlier this season. It shows we don’t give up.”

However, a day after every batter in the lineup got a hit, the WU offense sputtered in a 3-1 loss to TSU. Zach Engelken had a quality start, pitching seven innings and allowing only three runs, but WU’s one run in the first was not enough support for the Bods to pick up a win.

A second solid pitching performance came from starter Brett Sorensen in the doubleheader’s second game, which WU won 3-1. Sorensen pitched six shutout innings, allowing only three hits until the seventh, when TSU scored its lone run, which was unearned. The 2-0 lead WU gained in the second inning would hold up throughout the game, giving Sorensen his team-high fourth win of the season.

After winning a series against TSU, the Bods finish up the season against their toughest competition thus far. WU plays at Nebraska-Omaha tomorrow before beginning a three-game series this weekend against Emporia State.

The Hornets (42-6, 28-3) are ranked No. 2 nationally and have held the MIAA’s top spot all season long. Games one and three of the series are at Emporia on Friday and Sunday, with game two being played at WU on Saturday.

“We’re always excited to play this rivalry,” said Cook. “We beat them a couple times last season, so hopefully we can do the same this time.”

With no chance at postseason play and alternating home and away games in the rivalry series, this is the closest thing to the playoffs the Bods will experience in 2008. Winning just one against ESU would be the biggest accomplishment by far for this season’s team, not just for moral victory but because it’s not too late to be the spoiler in ESU’s great season.

“Winning against Emporia would just show that we can beat a team of that caliber,” said Joy. “We know that we can, and proving it at the end of the season would just show what we’re capable of next year. We have a chance to really create momentum and carry it over into next season.”