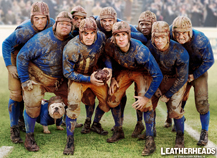 Football isn’t anything like it used to be in the 1920s. The opening scenes of “Leatherheads” demonstrate just how different the rule-less game was, as players with leather helmets ran around with one ball and several boyish maneuvers to get the worn football past their goal line for six points.

Don’t get confused about what this movie is really about. The main plot has little to do with football and much more to do with the triangular connection between three key characters: Lexie Littleton, played by Renee Zellweger; Dodge Connolly, played by George Clooney; and Carter Rutherford, played by John Krasinski.

Littleton is a news reporter and writer for a company at which her boss tells her she’s the absolute best. Agreeing, she takes on his challenge to get information on college football star Rutherford, who also happens to be a war hero from World War I. Littleton’s job is to get to know him in such a way that he will reveal the real story about WWI and explain why he doesn’t want to talk to reporters about it.

While Littleton is pursuing a friendship with the nationally known Rutherford, Connolly intercepts their conversation in attempt to get this college football star interested in earning big money by playing for his pro team, the Duluth Bulldogs.

When Rutherford signs the contract and starts traveling with the Bulldogs, both he and Connolly become attracted and ultimately attached to Littleton with her dry, sassy humor and cute sarcasm. Connolly knows that Littleton is just in this for the story, but Rutherford sees her as generally interested in his life and gives away vital information that exposes his fake heroism.

The time comes for Littleton to write her story, and her decision to do so makes for tense relationships and national judgment as both football and Rutherford become a bigger deal throughout America.

I’m not going to give away the ending to this romantic comedy because I highly recommend you see it for yourself. After all, who wouldn’t enjoy the company of Zellweger, Clooney and The Office’s Jim for a while? This was a smart casting decision. There were multiple times when the whole theater was laughing hysterically and shaking their heads in amusement as these characters spoke the most creative, clever lines in both hatred and love.

“Leatherheads” is a timeless classic that should be viewed by every generation. It’s the story of the beginning of football as a sport, a frustrating love triangle, and has a 1920s feel that makes women want to pin their hair back, put on a sleek red hat and ride away on an old rusted motorcycle. Go see this soon. You’ll understand.