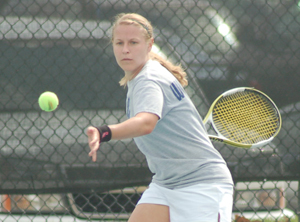 Senioritis is taking its course on the Lady Blues tennis team. With five seniors, tennis is just one of the many tasks in the next month they have to tackle before going pro in something other than tennis.

“We’re not doing too well right now on focusing on what we are supposed to be doing,” said senior Diana Goldsmith. “I hate to make it as an excuse, but we’ve been having a tough time trying to make time for everything because everybody is finishing up. But we’re trying to do what we can and just go out there and work together.”

The juggling has been tough for the Lady Blues as of late, as Wednesday they dropped their second straight match within a week to Emporia State, 6-3. The Lady Blues have dropped six out of the last seven to the Lady Hornets, including two MIAA championship finals and an early North Central regional exit in 2006.

“It’s always a tough match,” said Goldsmith. “Emporia is solid in both doubles and singles, but it’s just a matter of what we bring to the court that day.”

With the MIAA conference tournament approaching this weekend, the Lady Blues know they will have to find their groove quickly. But perhaps the hard lesson learned from last year is, that anything is possible this time of year. At this time last year the Lady Blues were 19-0 but then fell to the Lady Hornets 2-5 in the tournament final.

“We just don’t like to lose, so it’s really hard for us right now,” said Goldsmith. “We’re not trying to say these matches don’t matter and then all of a sudden now we have to play. We don’t like what’s happening but we’re going to get things in order.”

The Bods will look to capture their third-straight MIAA title this weekend, but it will definitely be an uphill climb this time around. This past week the Bods played for the first time without senior Rutger Vliegenberg, the Bods No. 1 singles player and one half of the No. 1 doubles team.

“A third title is a real big thing for us,” said Ryan Ward, sophomore. “But now with Rutger out we’re going to have to work real hard for it. Every year we won we weren’t the No. 1 seed, and it will be like that again. We’ll just have to take everything serious and one match at a time.”

Vliegenberg fractured his ankle playing intramural soccer. According to eMedicine.com the typical ankle fracture takes four to six weeks to heal, but Vliegenberg swears he will be back in two weeks, in just enough time for the NCAA regional.

Meanwhile the rest of the team, including Ward, tends to their own injuries. Ward rolled his ankle in a 6-3 exhibition loss to Johnson County last Monday.

The Bods picked up an 8-1 win Wednesday against Emporia.