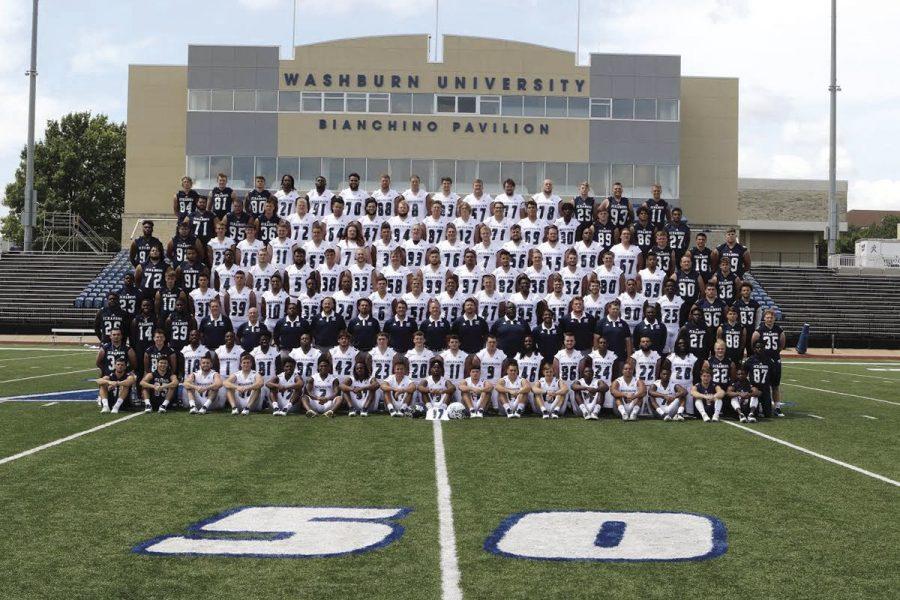 In full gear: The football team poses for their official team photo. Last season, the Bods had an overall record of 5-6.

With the start of the fall semester comes a new season for Washburn athletics. The Washburn football team is hopeful for what’s in store this season.

Craig Schurig, head football coach, says he is confident in the direction the team is headed.

“We feel like we have a really good team coming back from last year. We have a lot of returners but we also have a lot of new players that are very competitive to get on the field, so we really like our guys’ enthusiasm and how they’re developing into a team,” Schurig said. “We’re just excited about the whole year.”

In the preseason Mid-America Intercollegiate Athletics Association (MIAA) coaches poll and media poll, Washburn football ranked eighth out of the twelve teams in the conference. Topping the list in the coaches poll were the Fort Hays State Tigers. Ranking first in the media poll were the Northwest Missouri State University Bearcats.

“Our conference is tough. A lot of times it happens kind of how you finish the year. Last year we lost some games there towards the end, so you’re kind of projected out how you finished,” Schurig said. “It should motivate us. We feel like we obviously have a much better team than that, but it’s a tough conference. You’ve got to come every day and practice and get ready to play your best each Saturday.”

Josh Wright, senior defensive back, says he thinks the key to a successful season will be the team’s ability to work cohesively.

In addition to stating that he wants the team to play as a unit, Wright is hopeful that their camp performance will be mirrored during the season.

“We’re going to be pretty motivated this season. We’re going to feel pretty good,” Wright said. “There’s a lot of competition in camp and I just want that to carry over into the season.”

As for whom and what to what to watch for, Schurig says there will be promising plays and great returning players.

“We feel like we have a lot of good guys coming back, so we really feel like, whether it’s offense or defense, the plays should be pretty good,” Schurig said. “Opening game is Thursday, Sept. 5 here, so that’s nice to always start out at home. Hopefully we get a big crowd for that one.”