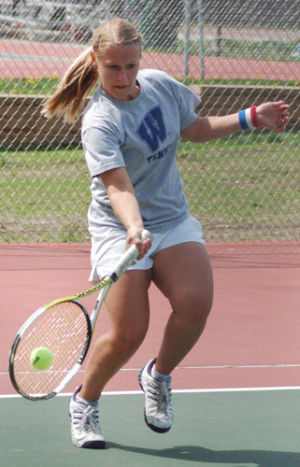 Next weekend will be déjà vu for the Lady Blues tennis squad.

The Lady Blues drew Emporia State for their first round in the North Central Regional, in Marysville, Mo. The Lady Hornets were the same opponent they drew and defeated 5-4 in the first round of the MIAA tournament two weeks ago.

With another Northwest Missouri victory the Lady Blues would face the same opponent the Lady Blues fell to right after the Emporia victory, 5-3 in the MIAA semifinal. The winner of the Lady Blue-Bearcat rematch would advance to the national tournament in Houston, Texas May 14-17.

The Bods will also travel this weekend to Marysville, Mo. for the North Central Regional. The Bods’ first-round opponent is St. Cloud State, an opponent they already defeated this year April 19, 7-2 on the same court.

“Not being at home presents another challenge in itself,” said senior Andrew Plum. “But we’ve beat [Northwest] at their place before and we feel confident.”

The Bods lost to Northwest Missouri April 9, 5-4. The winner of the Bod-Bearcat matchup would advance to the May 14-17 national tournament in Houston, Texas.

Both squads want to do well this weekend to send off head tennis coach Jennifer Hastert the right way. Hastert will step down at the end of the season to take care of her expected child in August. Washburn announced that Metro State coach Dave Alden will replace Hastert next year.

“[Alden] has been a great coach and is respectful every time we play him,” said Plum. “For the people returning it will be great because he is a very nice guy and comes in with a lot of experience.”