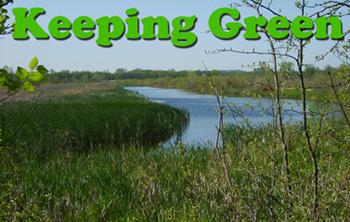 The debate has been raging for more than two decades, yet to this day it is still as fierce.

Opponents of the proposed construction of the South Lawrence Trafficway, which is an extension of K-10, have argued for years that the construction would cause harm to the Haskell-Baker Wetlands and all the creatures in the habitat. Proponents argue that the construction is vital to development. Many argue, however, that it’s just time to get it done with.

“There’s probably only one thing that there’s complete consensus on within Douglas County, is that the Trafficway needs to be completed,” said Craig Weinaug, Douglas County administrator. “The details of how you do it and what the routing should be are where the consensus falls apart.”

Weinaug, who has been the county administrator for 16 years, said the presence of the wetlands has complicated the process of routing for the remainder of the Trafficway, which is why it has been a 20-year dilemma.

“This is an issue that we’ve struggled with for a long, long time,” said Weinaug. “The current proposal that we’ve gotten … provides a lot of improvements to the wetlands and does a lot of mitigation. To say it’s the wetlands versus the Trafficway is a significant simplification.”

Despite having the appearance of a two-party argument, Weinaug said both sides have to work together and make sacrifices so that both sides can be sufficiently satisfied. However, there is still work to be done before mutual satisfaction takes place.

Senior Paige Stonerock, co-president of the Washburn Sociology/Anthropology Club and member of Social Justice League, thinks there is a clear-cut solution to the quandary.

“The only viable option is to build south of the river,” said Stonerock. “Lawrence is expanding now. The bypass is no longer a bypass. They’ve proposed ideas like sound walls and a lot of things to limit the environmental impact, but we’re talking close to ten lanes. There is no way that’s not going to impact more than just the area that it is.”

Stonerock said most opponents of the highway believe there is no eco-friendly solution to constructing the Trafficway anywhere throughout the wetlands. She said many of the stipulations that should protect the wetlands, such as it being an endangered habitat or a burial ground, have been undermined with loopholes.

“The big news right now is that we’ve had the return of the North American otter,” said Stonerock. “He came back on his own, he’s setting up shop. Because this is the place of so many creation myths, most of them surrounding sort of mud diver creatures and wetland creatures, the otter is one of those creation creatures for many North American groups within the area. Many people think that’s it sort of a sign that he’s returned after not having any otters around for 100 years.”

Senior Resa Boydston, also a member of the Soc/Anthro Club and SJL, shares Stonerock’s belief that the stability of the habitat is the main concern.

“There are animals that live there where that’s the only place on the planet they live,” said Boydston. “They are really precious creatures that I would hate to see go extinct.”

Boydston believes in preserving the wetlands so they can be enjoyed by both inhabitants of and visitors to the sacred land. She said when someone enters the wetlands for the first time, it becomes a part of them and is a memory that will last a lifetime.

“It basically boils down to it’s the right thing to do,” said Boydston. “Don’t plow, don’t touch that area. It needs to be there. It was put there for a reason. God put it there, leave it alone.”

All slideshow photos courtesy of Paige Stonerock and Trisha Rhodes.

Slide 2Up close with creatures: Michael Caron and Trisha Rhodes explore the creatures that inhabit the Wakarusa wetlands. Other creatures like tadpoles, to the right, also call the wetlands home.

Slide 3Offering: Paige Stonerock offers a sacrifice of tobacco to the spirits.

Slide 4See it while you can: A group of Washburn students views the wetlands and the creatures that inhabit them.

Slide 5That dam construction: Joseph Sinclair, sophomore in nursing, and Michael Caron, executive director of Save the Wakarusa Wetlands, trek across a beaver dam.