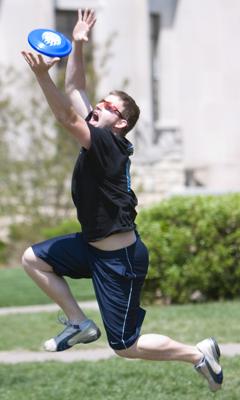 As the semester begins to wind down, students are stressed out by finals. Classes are getting rough and professors are trying to cram as much as they can into these last weeks.

The Campus Activities Board has launched Retro Recess Week to provide relaxation and stress relief to students. Guided by the idea of letting students’ inner child out, the sporting activities scheduled were some games people liked to play in their elementary school years.

“We try to bring back things people missed in elementary school,” said Chris Marshall, CAB variety director. “By putting them into Retro, students can relax and take all the classes and homework out of their mind.”

From 11 a.m. to 1. p.m. Monday through Wednesday, wiffleball, ultimate Frisbee and kickball games took place on the Memorial Union lawn. Thursday, students played the video game Rock Band in the lower level of the Union, and Soccer Showdown was held on Friday on the practice fields west of the Art building.

“It’s pretty cool. I’m feeling like I’m going back to my childhood,” said William Smith, who participated in the event. “These days, you have nothing to do but study. But when playing these games, everyone is having fun.”

CAB was optimistic at the turnout of this week-long event, but whether they will continue this series of activities is still up in the air.

“We had decent turnout this year. I think CAB should sponsor Retro Recess Week again next year,” said Mike Ditch, executive director of CAB. “However, all of this is contingent upon whether the new directors want to pursue this event again.”

While CAB has done lots of advertising such as sending fliers, hand bills and messages on Facebook, student involvement has remained relatively low. However, Ditch said if CAB focused its advertising efforts more in the LLC and Village next year, the campus would see a significant increase in people playing games on the Union lawn.

Last year, Retro Recess Week couldn’t be held as scheduled because of the construction of the Union lawn. Scheduling this event again shows that CAB definitely has some promise, said Ditch.