The Washburn Review • May 12, 2008 • https://washburnreview.org/19883/sports/experienced-team-doesnt-have-respect-of-ita/ 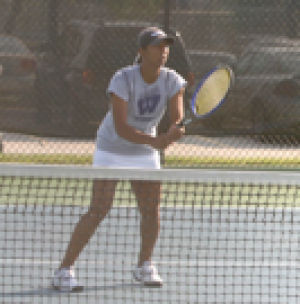 It’s no secret that the Lady Blues tennis team returns five seniors from a team that completed last year’s regular season 17-0, but to the Intercollegiate Tennis Association it is a rumor that just has not caught on.

The Lady Blues are not ranked in the top 40 and are No. 3 in the North Central Region behind Emporia State and Southwest Baptist.

“I try not to think of the rankings at the beginning of the season,” said senior Allie Gardner. “Teams really haven’t played each other. We’re just looking to get started and get some experience and focus on the conference.”

The lack of praise could be a carryover from last year’s finish to the regular season. The Lady Blues were upset in the MIAA tournament championship final by Emporia State 5-2 and then fell to Northwest Missouri 5-3 in the regional final, preventing a trip to the NCAA national tournament.

“We learned it doesn’t really matter during the season who is undefeated and who’s not,” said senior Amber Raindl. “The regular season is pretty much practice. We have to focus more toward regional and conference tournaments and not worry about a loss here or there.”

But if fall was a sign of what is to come this spring, the past is behind the Lady Blues. The fall ITA North Central Regional was a success for the Lady Blues. Senior Diana Goldsmith won every match but two. Goldsmith fell in the singles final to Northwest Missouri’s Kristina Vucenov and along with fellow senior doubles partner Raindl fell to Emporia State’s Natalie Villaflor and Marcella Bayon in the doubles final.

Goldsmith and Raindl, though, have four years of experience under their belts. This spring’s success will rely on how fast the team’s two freshmen are integrated into the system. All eyes will be on freshman Rachel Stevens, a native of North Richland Hill, Texas, as she played in singles and doubles at the fall regional. Stevens’ doubles partner was fellow freshman Erika Lucero, a Shawnee Heights product.

“We are here to just have fun and finish it out on the right page for us seniors,” said Raindl. “We have two freshmen that are a great asset so we should do just as well, if not better. Erika is a strong doubles player and Rachel is a strong singles player.”

The Lady Blues open the season against Barton County Feb. 23 for the first of seven straight home matches. The Lady Blues will take all the breaks they can get this season as they go straight from their home stand to playing No. 10 Rollins, No. 22 Florida Southern and No. 28 Tampa back-to-back.

“The beginning matches are there to get us ready,” said Gardner. “Every single match is important to get everybody ready to play.

“We just have to mentally prepare for spring break because each opponent is ranked above us, which gives us more incentive to do well.”

But this season comes down to a task none of the five seniors have completed and one a Lady Blues tennis team hasn’t done since 2004: win a MIAA championship. Last year’s champion and Lady Blues rival No. 24 Emporia State are favorites to win it again this year. The Lady Blues beat Emporia State 5-4 last year in the regular season but Emporia avenged the loss in the MIAA final.

“Emporia is big competition for us,” said Gardner. “It’s always a little intimidating to play them. But we have a strong team with a lot of depth, so we can handle them. We did come up short in conference last year and it was definitely disappointing.”