The Washburn Review • May 12, 2008 • https://washburnreview.org/19880/features/dean-of-enrollment-to-retire-after-three-decades-at-washburn/

Dean of enrollment to retire after three decades at Washburn 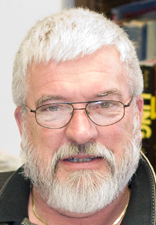 As dean of enrollment Allen Dickes looks toward retirement after 30 years at Washburn University, he is optimistic about the upcoming change of pace.

Interaction with students, faculty and staff has been a significant part of Dickes’ life during his time at Washburn University. An instructor of economics for 30 years as well as a secretary to the general faculty for 29 years, he expressed that guiding students has been one of the most rewarding parts of his job.

“Teaching and advising students is really what it’s all about,” said Dickes.

Beginning his work at Washburn in 1978, Dickes and his family lived in Texas, where he was employed at Texas Christian University. It was there that a fellow co-worker who knew the then-vice president of Washburn University told Dickes of the job opening in Topeka, Kan.

Dimensional in his service, Dickes has been an assistant to the vice president of academic affairs prior to his actual holding of the position for two years, from 1983 to 1985. He also worked as the executive assistant to the president from 1978 to 1981 as well as director of institutional research from 1985 to 1987 and then again from 1988 to 1996. It was in 1996 that Dickes became the dean of enrollment.

Annita Huff, director of financial aid, expressed her sadness as Dickes prepares to go but says that she is equally happy for him to begin the new life that comes with retirement. He has served as Huff’s supervisor for more than 11 years. She described Dickes as loyal.

“He is wonderful to work with, a very supportive and fair boss,” said Huff. “He understands the complexities of financial aid as well as what it takes to manage an office.”

Dickes encourages college students to enjoy their current phase of life by using this time to expand their horizons.

“College can and should be one of the best times of your life,” said Dickes.

Dickes’ retirement will be effective July 31. The process of finding a permanent replacement will begin immediately.