The Washburn Review • May 5, 2008 • https://washburnreview.org/19870/news/yearbook-censorship-uncalled-for/ 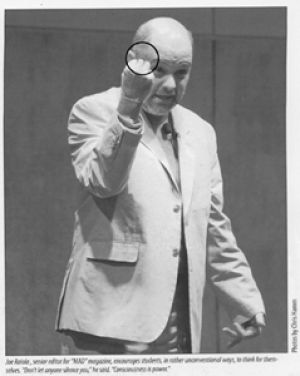 We on the Washburn Review staff do a lot with the other publications produced by students. The support system allows Review students to get experience with different types of writing and designing.

The completed Kaw yearbook was delivered about a week ago and its editor-in-chief opened it to find an unpleasant surprise. The feature story about Joe Raiola, an editor at MAD magazine, featured a picture with Raiola showing the audience his middle finger. His speech and his gesture tried to communicate the importance of free speech and to avoid censorship. In the finished yearbook, someone at Herff-Jones airbrushed out the middle finger of Raiola.

Let’s recap: a story about fighting censorship being censored.

Now, the yearbook company is not a governmental entity and therefore not bound to a pure definition of free speech and free press, but one would think that a company that produces a form of press would be more adherent to the rule. According to the editor and the advisor, someone from the company called and asked if they wanted the figure brushed out. This also jumps off the logic train at high speeds not only because they are dealing with a college yearbook, but also because if the staff or the advisor did not want a picture of someone flipping the bird in the yearbook, why would they put it there in the first place. If the yearbook staff really wanted to use that picture but did not want to use the middle finger, a majority of the staff is probably talented enough with Photoshop to airbrush out the offending figure in-house.

The notion of a story about upholding free speech being censored is hilariously ironic – almost sadly so. More important than hilarity is the over arching offense of free speech. The yearbook is a student publication that deserves the right of free speech just as much as any student publication. Why the company felt the need to airbrush out a middle finger is beyond us. Perhaps it was because the company is used to dealing with high school yearbooks, but those are more closely watched by adults who would take out the finger if need be. By the time the pages reach the printer there should be no tweaking done other than to fix minor details that will aid in the printing. The yearbook staff wanted the finger because it added to the story. It wasn’t a gratuitous use of nudity or offensive material – it was the point of Raiola’s speech.

Herff-Jones should think seriously about what it is doing and why it is doing it. If it is trying to be paternalistic about yearbooks, then it should just start a service that goes around to high school and college campuses and makes a clean, neat, pretty and unrealistic version of college life. Until then, leave the finger alone.