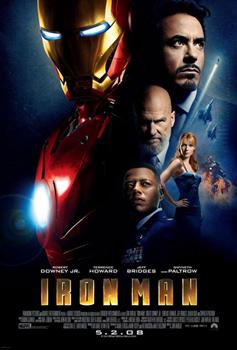 Iron theatrics Iron Man made his theatrical debut on May 2. So far, Iron Man has grossed more than $177 million dollars in the US and nearly $300 million worldwide.

“Heavy boots of lead, Fills his victims full of dread, Running as fast as they can, Iron Man lives again!”

These lyrics from Ozzy Osbourne’s song “Iron Man,” have been etched in many people’s minds and have had many fans anticipating the release of Marvel Comics’ latest superhero movie. But one cannot truly know the origin of Iron Man by merely watching the film adaptation.

Famed Marvel Comics writer Stan Lee originally created Iron Man in 1963. Iron Man first appeared in Tales of Suspense #39. Lee had toyed with the idea of a businessman superhero and in his development of his creation, Lee made his character a flamboyant, rich ladies’ man. His inspiration for the character’s playboy personality came from that of real-life inventor and billionaire Howard Hughes.

Stan Lee originally wanted to pen the origin story but eventually handed it over to Larry Lieber. Iron Man truly came to life in the artistry of artists Don Heck and Jack Kirby. Iron Man appears in a bulky grey armor in his first story. In his second story he appears in with golden armor and then finally, in his third story the suit changed to the suit we all know Iron Man as having, the red and gold armor. So he begins with the Mark I armor and ends up having the Mark III armor being the suit he prefers.

But Tony Stark/Iron Man doesn’t come out with having his demons.Iron Man’s origin story has changed throughout the years of what war he was injured in. In 1963, it was Vietnam. In the 1990s, it was the Gulf War and in 2008, it was in Afghanistan.

Tony Stark faces several enemies throughout his journey as Iron Man, from many personal issues that force him to alcoholism and even the loss of controlling interest of his company multiple times. Yet even with the loss of his company, Tony Stark/Iron Man has been able to regain his company back.

Iron Man is a founding member of The Avengers. His most recent and controversial outing happened during the Marvel Comics Civil War. During this plot, the people’s faith in superheroes was lost after the deaths of innocent civilians during a battle between heroes and villains. Iron Man led those who were for revealing their identities to the world, while Captain America led those heroes opposed to the idea of revealing their identities.

Throughout his life as a Marvel character, Tony Stark/Iron Man has been a hero to many and an American Icon to all.