‘Knight,’ Ledger performance worth all the hype 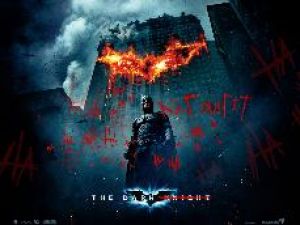 I expected to walk into “The Dark Knight” and see Christian Bale brooding around, beating up on people and a lot of explosions. Frankly, I wasn’t excited to see it. Then, when a 9:45 p.m. show was sold out, and the line stretched to the back of the movie house to get into the theatre and get seats, I was even more annoyed – but, we were the first ones in line for the 10:20 show. Then people kept talking during the long stream of previews and throwing popcorn, one of those theatre experiences that can make you want to rent movies for the rest of your life.

“The Dark Knight” made it all worth it.

Everything was so perfectly balanced, which is strange for a superhero movie, with the fight scenes, the love scenes and the scheming scenes. The movie never dragged, and in the entire two and a half hours, I didn’t look at my watch once. Batman, played by Christian Bale, is, of course, the Dark Knight and is introduced to Harvey Dent, played by Aaron Eckert, the new District Attorney of Gotham City. Dent can put away criminals a legal way, whereas Batman puts them away by beating them to a pulp, but never killing them. Eventually, the Joker, played by the late Heath Ledger, manages to turn everything on its head in an attempt to “kill the Batman.” Dent is a white knight in shining armor, whereas Batman is a dark knight and only has the loyalty of half the city.

Bale serves his purpose: he is a calm but conflicted protector of Gotham and looks great in the batsuit. Eckert takes an interesting turn from “Thank You For Smoking.” However, the real star of the show is Ledger. I didn’t expect the Joker to make an impact on the audience. He is a bad guy; not supposed to be anyone of note or turn in any special performances other than the average bad guy. Ledger plays the Joker in a special, insane, maniacal way that is hardly describable. It takes a special kind of actor to play evil and vulnerable and weird in such a way that is believable and more than a little frightening. Ledger was not Heath Ledger playing the Joker, Ledger became the Joker and one wonders what he could have accomplished as an actor.

In any case, “The Dark Knight” changed my tune about the new Batman franchise and, coupled with “Iron Man,” I might just