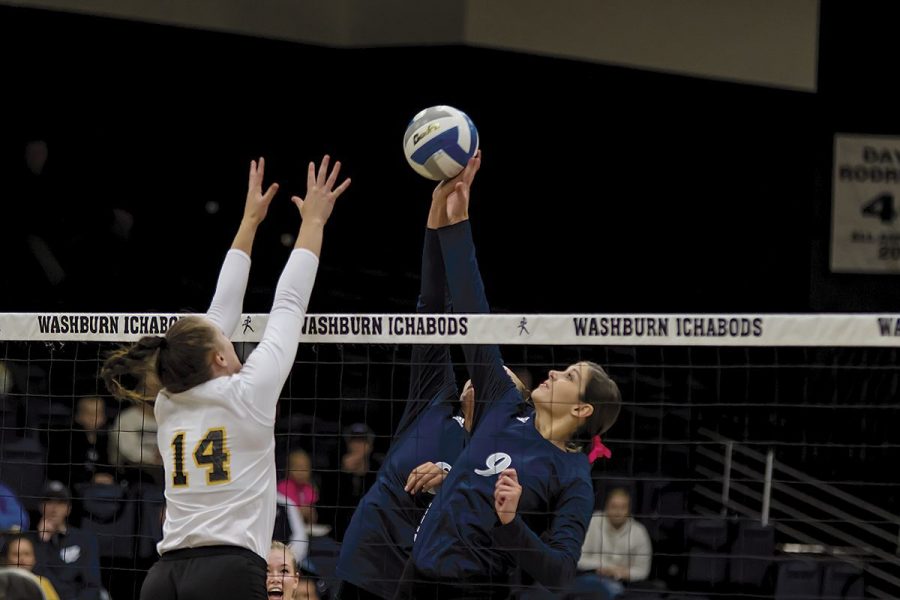 Success: The volleyball team is ranked highly. They have been practicing hard.

“We have a little saying that we have to manage expectations and eliminate the noise. So, that poll is just more noise. It doesn’t really mean anything,” Herron said. “It means that we had a good year last year and people are basing everything on what we did last year, not what we’re doing now. We’ve got a lot of work to do.”

Herron has been coaching volleyball for 37 years, 18 of which have been spent at Washburn. In his time coaching Washburn volleyball, Herron has established an overall 504-103 record and a 234-59 MIAA record. His success as a coach, he says, is partly due to the players he recruits.

“When you coach, the biggest part of coaching is recruiting,” Herron said. “You have to recruit the kinds of kids that best fit you as a person and as a coach, so I think that’s the biggest thing I have done fairly well. I’ve recruited smartly and gotten the kind of players that best fit how I want to run things.”

“There’s nothing more important than the team chemistry. Nothing. The environment that we have here is a cultural thing. It’s the type of culture that I, as the head coach here, have tried to build in all my years,” said Herron. “Every one of those kids were a big fish in a little pond. Now they’re just a fish in a pond. We have to have those fish swim together. Things got to flow. If they don’t, I’m going to be honest with you, they don’t last here. They’ve got to buy into the culture. They got to buy into what we’re trying to sell as a team or what kind of image we’re trying to put forth to these fans, to the students.”

Playing three seasons of volleyball at Washburn, junior and Health and Fitness Promotion major Genna Berg, also believes team chemistry is integral to maintaining the success of the team.

“That’s the biggest part of who we are as a team. It always has been,” Berg said. “Last year it was awesome, so just with getting new people every year, we have to find that new chemistry and finding that chemistry and our vibe is going to be really important for us.”

While the team strengthens relationships with one another on the court through their daily practices, the team also spends time bonding off the court to build chemistry, says Berg.

“Anything we can do together will help us learn about each other and find that chemistry and relationship,” Berg said. “Besides going and getting lunch, we do book meetings every week. We read this book that’s about how to be a good teammate or how to become mentally strong and we learn a lot about each other, like what we’re struggling with. By hearing what your teammates struggle with, you can learn to pick up on when they’re struggling. You can help them and be a good teammate.”

While recruitment and team chemistry are important to Herron and Berg, Herron says there is nothing more important than academics.

Under coach Herron, the Washburn volleyball team has been named to the AVCA Academic Award four years, two of which have been consecutive. In the 2018- 2019 school year, the Ichabods averaged an overall 3.478 GPA.

Berg says the team holds high expectations for themselves for the upcoming season.

“At the beginning of every season we make goals and we made it really far last year, so we have high expectations for ourselves,” said Berg. “One of them being conference champs. We were so close last year. We want to be outright conference champs for regular season and we’d also like to win the tournament.”

Herron says that because his team has “been there, done that,” Washburn has become a target for any team they play against.

“Our target on our back is really big. We’ve got a nice big target on our back. Everyone wants to stick knives in it and crawl up it,” said Herron. “We’re going to get everybody’s best shot every single night and we know that here.”

Herron encourages fans to come to the games, as he says the fans are able to make a difference.