Fishing out west can be best 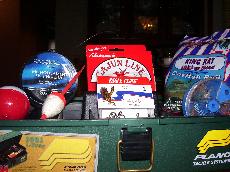 For anglers who are used to the ample farmponds and majestic lakes of the countryside, moving to the city can be a daunting challenge.

However, all hope is not lost. The west side of Topeka may not yield the biggest fish in town, but there are still options to sooth your fishing withdrawals.

Many Topeka-natives have fond memories of the Gage Park fishing experience. Whether those memories

contain actual fish or not, it is the first and most obvious choice for most anglers in the area. The area is fished heavily throughout the summer,

which can make things all the more difficult. In order to catch the attention of fish, your presentation must be as realistic as possible. The fish in these waters have seen every form of fake worm, crawdad, frog and baitfish in existence, and are less than likely to fall for the same tricks again.

Most of the experienced fisherman from the area prefer to use flyfishing techniques to create strikes, which can be succesful due to the bass and bluegill that feed on the top water and can often be seen leaping from the water nears the banks. However, flyfishing is a unique talent and not everybody has the patience to learn it. A suitable alternative would be to tie a fly to a light line, preferably 8-pound. test Cajun Line since it is a practically invisible line in the water, on a spinning reel and a 6-foot rod. Snap a light weight on about two feet above the fly. This will give you the necessary weight to get a cast off, though it will not go far. After casting, lightly jig the fly back to you while reeling as little as possible. This can give the impression of an insect jerking

through the water, and can be a deadly approach for bluegill, bass and crappie in any small pond where the fish stay near the banks. If fishing in a pond with hybrid bluegill, this is really the best way to go and can lure in some monster panfish.

However, there is no alternative better than natural baits, especially in the heavily fished areas around the city. A worm, hook and bobber combination

can lure in any type of fish in the waters, and chicken liver is always a good option to attract catfish.

The Governor’s ponds, located near the I-75 exit on Fairlawn, can be a great source of enjoyment even for experienced anglers, though fish in this area aren’t exactly the largest ones around. The number one commodity

in these ponds are catfish, and like Gage Park, you are always likely to see other hopeful anglers nearby. After a recent trek to the east pond I discovered a nearly foolproof combo to use in these waters.

A simple Zebco rod and reel with 8-pound testline should suffice for this pond, since the catfish here rarely get larger than a pound or two. However,

I decided to overcompensate, using a big cat rod with a 20-pound test line for no other reason than the fact I could. Attach a treble hook, and put a bobber about three feet above the hook. Some people scoff at the usage of bobbers or floats, but they give you an idea of what the fish is doing and help you detect even the tiniest bites, especially in areas like this where fast winds can often make such observations almost impossible.