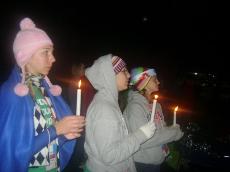 Outbackers from up north Members of Mother Teresa of Calcutta Church made the trip to Australia for the World Youth Day celebrations. Pope Benedict XVI sent daily text message to the members of the audience to remind them to stay vigilant with their beliefs.

For some, there is no greater experience than spending a week at the religious camp known as Young Life.

Such is the case for YL leader Kristin Wipf. She will be graduating from the Washburn school of nursing in December,and has been involved with YL for six years. Two of those years were as a camper, and four of them have been as a volunteer YL leader.

According to younglife.org, “YL is a non-denominational Christian non-profit organization that is committed to introducing adolescents to Jesus Christ and helping them grow in their faith. Young Life staff and leaders are caring adults who strive to build positive relationships with teenagers.”

YL is nationwide and also growing globally. In Topeka, every other Monday night is YL club where high school students from across the city can come hang out, be crazy, get messy and develop friendships.

“What’s great about YL is that it’s a ministry tool to all of Topeka and anyone is welcome,” said Wipf. “We get to hang out and build relationships with everyone who comes.”

Summer is the most important time for YL because of camp. There are several camps nationwide, and Topeka YL has gone to a few of them over the years. Right now they are at Sharp Top Cove in Jasper, Ga. Wipf is there for the fourth time.

“I went there first as a camper, second as a leader, then I stayed a month to be a summer staff worker,” said Wipf. She’s back now as a leader again with her Topeka high school girls.

Sharp Top Cove, along with other YL camps, is deep in the Georgia mountains and loaded with numerous activities. Campers scream as they pull the cord to release the giant swing, they soar over trees on the zip line and glide into the lake, and they conquer the climbing wall, climbing tower and quantum leap. The blob sends campers to the sky, the giant slides shoot them into the lake, and the mountain bike trails are a wet surprise.

This camp also contains a smoking pit, disc golf, a ropes course, a pool and hot tub, and so much more for the campers.

“Camp is a resort for high schoolers,” said Wipf. “Anything you could possibly want to do is there.”

Wipf said some of her closest moments with Christ have been at camp because she was away from the distractions of home. She said that there is quite a difference between YL camp and many church camps.

“I’ve been to church camps many times, and YL camp is so much different because of the freedom,” said Wipf. “There are no rules. Our friends get to be teenagers with nothing holding them back.”

Every day and night at camp is filled with surprises. There are characters throughout the week that are either “good guys” or “bad guys.” Some of them try to take over the camp, some try to save the camp, and all are there to entertain.

Apart from the characters, there is always one main speaker who knows how to reach the campers.

“They use their weaknesses to reach these teens,” said Wipf. “They’re real and raw with their life experiences and have a way of connecting with the campers.”

Wipf said that her favorite part about camp is being able to spend every waking moment with her girls and seeing how their lives change over the course of the week. She knows exactly what drew her to being a YL leader in the first place.

“There are many reasons I’m a YL leader,” said Wipf. “I love high school students, and I’m thankful that I can be a role model in their lives who represents Jesus Christ.”

Wipf said some try to mislead students in her opinion by telling teenagers what’s cool and what’s not.

“These high school students are continually bombarded with lies from the world shown in media that try to portray a fulfilling life,” said Wipf. “In the end, these lies lead to emptiness and disappointment.”