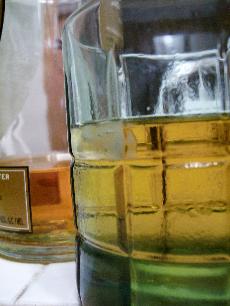 Whiskey lullaby A trip to Scotland is not complete without taking a visit to the world famous Scotch Whiskey Experience, better known as "Disneyland, but drunk."

I went to Scotland for the first time this summer, and had never been, so I figured I should try it out the way Scots do.

I can’t honestly say I know how that is, but I did my best. My last morning there I tried haggis for breakfast. It was recommended to eat it on toast with baked beans. I have no idea why someone would think that the insides of sheep could be made more appetizing if eaten with toast and beans, but it was the thought that counts. When I went to the movie theatre, I had to decide between the adorable “Wall-E” and the questionable “Donkey Punch.” There had to be a better name for that teen thriller, but what do I know. I also got swept into a crowd heading toward “The Proclaimers” concert, which was the most beautiful experience of my college life.

In the land of Scotch, I could not pass up the Scotch Whiskey Experience. Located on the Royal Mile, a beautiful yet very touristy road, it’s very easy to find. There were several tour choices, from the most simple (fancy glass, dram of whiskey, tour and discount at the store), to one with all the perks of the first tour but with five more drams of whiskey to try. I had never tasted whiskey before, so I was a tad nervous. The guide told us all about the alcohol… how to sniff it and appreciate it and something about it having an oaky finish (what does that really mean?) and he said to go ahead and drink. I thought I was supposed to drink it all at once, so I threw my head back and took it like a man, only to find out that most people sipped and mixers were supplied. Glad I knew that before I burned away all the tissue in my throat.

We moved to another room after that and watched a hologram tell us how whiskey was made. I guess they assumed that some of the visitors would be a bit buzzed and would need to hear the same information about four different times.

Then came the promised barrel ride, which gave the tour the nickname “Disneyland, but drunk.” The barrel ride did prove to have a little more information than the last few stops on the tour. It went through the history of whiskey in Scotland with many wax figurines and creepy lighting. It was practically Splash Mountain, only wicked slow and boring. That’s probably why they gave everyone some whiskey before it started. After the ride, we all were escorted downstairs to either get our last five shots of whiskey or to wander around the store. It was an experience, that’s for sure. It wasn’t a bad one, but I’m hoping that nothing like that comes to Topeka because I only see bad things happening there, but I am most thankful that “Donkey Punch” will not be making a premiere here, because I can’t see any good coming from that.