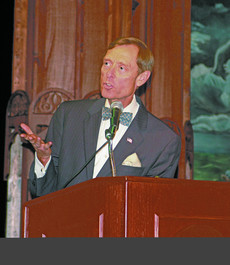 Budget Squeeze Jerry Farley, Washburn University president, spoke to faculty and staff at the all-campus convocation last Friday. Among the topics addressed was the fact that Washburn will be down an estimated $1.5 million in tuition dollars because of a drop in credit hours.

Jerry Farley, Washburn University president, spoke at the all-university convocation Friday afternoon, welcoming faculty and staff back to a campus full of changes, in more than one way.

Among the news, the Higher Learning Commission recommended Washburn for another ten years of accreditation and the move to bring Kaw Area Technical School under Washburn’s Board of Regents. Farley also addressed more somber information in regard to the state of the university. While incoming-freshman enrollment is up for this year, Washburn is down an estimated 4,000 credit hours this semester, and Farley announced the prediction for the same kind of drop spring semester as well. The estimate is just that, though, and Farley said the exact number for this semester will not be know for several weeks

“We continue to have a retention issue,” said Farley. “We know this is difficult economic times right now. We have to adjust.”

At the current rate of $197 per credit hour for in-state tuition, the estimated 8,000-hour drop is about $1.5 million from Washburn’s budget. Combined with the news that state assistance for universities will drop a total of 7 percent over the next two years, Farley asked all in attendance to pull together to help cut costs to make up for the dip in available funds.

“It’s going to be painful,” said Farley in reference to budget adjustments. “There will be pain involved.”

The one bright spot in the latter part of Friday’s convocation was tuition would not be raised to compensate for the budget cuts the university is about to undergo.

“We may be at our ultimate price-point for tuition and fees,” said Farley, continuing by saying he believed students could not afford to pay more than they currently are to attend Washburn.

Farley was adamant to stress the point that students didn’t create this problem, so he asked faculty and staff to do as much to make the process as painless as possible for students.

Following Farley’s speech, JuliAnn Mazachek, Washburn Endowment Association president, spoke to the crowd to kick off the university’s annual faculty/staff fundraising campaign. Last year the university reached a 35 percent participation rate among faculty and staff, and Mazachek said they would like to reach 45 percent this year.

“These donations are an important part of funding the university,” said Mazachek.