Rock the Vote unites through music 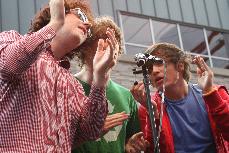 Five bands joined several Kansas and Missouri politicians on stage Sept. 7 at the Rock the Vote concert at Power and Light District in Kansas City, Mo. The bands consisted of two local acts, The Belated and Waiting for Signal, as well as three major groups: The Wombats, Carolina Liar and Ludo.

The doors opened at 2 p.m. for the public to get a good spot, visit political booths and, most importantly, register to vote.

“Three hundred and eighteen young people registered to vote, which is a huge number for one event,” said Nikki Powell, one of the Rock the Vote coordinators for the Kansas City area.

Rock the Vote was established in 1991 in response to, what the Rock the Vote Web site describes as “a wave of attacks on freedom of speech and artistic expression” and to encourage young people to speak out. Rock the Vote is a non-for-profit, non-partisan organization whose main goals are quality voter registration and education on the logistics of the voting and registration process. Rock the Vote does not take part in the discussion of issues surrounding campaigns, nor do they try to persuade voters to do anything besides register to vote and then actually vote.

“By partnering, [the radio station] the Buzz is able to give equal time to local politicians,” said Powell. As for the mixing of live music with politics, “It’s all about freedom of expression,” he said. “We’re really big on bands expressing their political opinion. It’s about bringing music and political opinions together.”

This was apparent when The Belated, a Kansas City band, accented the stage with an Obama ’08 poster propped up against the lead singers microphone stand.

In between band sets, local politicians, mainly democrats and libertarians, spoke to the crowd about particular issues and gave encouraging words to sway people to register, and to get out there and vote.

One speaker presented himself in a rather different way. Kansas Representative Dennis Moore walked onto the stage with acoustic guitar in hand and asked the crowd whether they wanted him speak or sing a song. The eager crowded roared for a song, so Moore sang a rendition of “This Land is Your Land” and asked for the audience to sing along. The audience responded excitedly.

It was interesting how an older politician can reach out and communicate to a younger audience in such good taste.

The concert came to an end when the headliner, Ludo, performed “Epic,” originally by Faith No More.

Rock the Vote is currently registering young people to vote at events all across the nation. They were also on campus Wednesday with some of the cast from “The Real World.”

For those who missed registering at Rock the Vote on campus last week, there are still other opportunities to get registered. The deadline to register in Kansas is Oct. 4.

Any information on how to register to vote and where to vote can be found on the Web site, www.rockthevote.com.