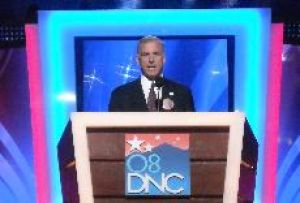 Many of you are aware that the Democratic Party held its national convention this week in Denver, Colorado. What you may not know is exactly what occurs at these conventions.

I had the opportunity to travel with the Kansas Democratic Party and work with the staff as a page. My duties would include assisting the Kansas Delegation, which was comprised of the individuals who represented the delegate votes Obama earned from the Kansas Caucus, as well as the alternate delegates, working the daily KDP office hours (9:30 – 11:30 a.m. and 2:00 – 4:00 p.m.), and running errands for and doing anything the KDP asked of me. Outside of that, I was there to enjoy the convention and, on a personal level, soak up any and every bit of information regarding politics, politicians and the process of electing the leaders of our country.

Even with that explanation, I still wasn’t quite sure what to expect. I was told repeatedly by numerous people, including Governor Kathleen Sebelius, that I would be run ragged, get very little sleep, and have the time of my life. While this was one of the greatest learning experiences of my life, it was also the biggest party to which I’ve been invited. Each of the four days was packed with political events, fundraisers, brunches, lectures, receptions, concerts, and, of course, parties, all set up to celebrate Barack Obama and democrats from all over the country.

Although I am still overwhelmed with all I encountered, I will attempt to recap my trip for those of you curious about an inside look at the Democratic National Convention.

The KDP held their office hours, so I did my first actual work, which consisted of checking in the arriving delegates and alternates, setting them up with their KDP duffle bags, and answering their questions (or directing them to the KDP staffer who could). Afterward, some of the staffers went to a concert featuring performances by Dave Matthews Band, Sheryl Crow and Sugarland. I attended a delegate party thrown by the Friends of New Orleans. The event recognized the organizations still working to help Hurricane Katrina victims. It was here where I faced my first open bar, authentic New Orleans music and gumbo, and saw Howard Dean speak. After this party, there was a reception in our hotel for delegates from Kansas and North Carolina, the state with whom we were sharing our hotel. Only at the Democratic National Convention can Kansans and North Carolinians come together, enjoy cocktails and talk basketball without a riot ensuing. I was disappointed because John Edwards was slated to stay in our hotel, but given the circumstances (exposure of his extra-marital affair), he was absent from the convention. Shortly after midnight the KDP held a staff meeting where we went over the details of the following day, when the convention officially began.

I was up bright and early at 6 a.m. for breakfast. The guest speaker was the governor of Montana, Brian Schweitzer, who I had never heard of, but is now one of my favorite governors. His speech was animated, inspiring and had the entire room cracking up. After breakfast, Lalo Munoz, my fellow page, and I passed out the credentials that would get delegates, superdelegates, alternates and other convention officers into the Pepsi Center, where the convention was held. There were three levels of credentials to hand out: the green “floor” level credentials, reserved for delegates, super delegates, and pages; the dark purple “hall” level pass, reserved for “honored guests”; and the light purple “hall” level passes, reserved for alternate delegates and “special guests.” Any credential was a hot ticket, since one was required to even set foot inside the Pepsi Center. Those with the green credentials had access to the convention floor, while the honored guests could sit and watch the convention from the first level of seats; the same went for the special guests/alternates, except they had to sit in the second level of seating. However, either guest could meet a person with a floor credential in the hallway and swap passes for a view of the big show from the floor level. I also saw orange “arena” credentials for members of the press and other VIP guests, which I assume provided access to every level. The two page passes were to be rotated around the KDP staff so that each member got to go to the floor of the convention at least once; my day to go was Monday.

I took a shuttle to the convention, passed through the security tent, walked into the Pepsi Center, rode up the escalator and once at the top, looked to my left and saw none other than Dennis Kucinich and his tall, impossibly gorgeous, red-headed wife. They were just standing there, casually giving an interview, not but ten feet away from me. I was so dumbfounded I just watched as they finished up, went down the escalator and left. As I immediately realized what type of experience I was in for, I kicked myself for not having my camera ready.

The convention floor was breathtaking. I found the Kansas delegation but could not sit still for more than two minutes. All evening I ran around like a kid in a candy store. I couldn’t believe all the celebrities, journalists, politicians, pundits and cultural icons I saw strolling around the Pepsi Center giving interviews, signing autographs or acting too busy to stop for a picture with star-struck individuals such as myself. Before the night was over, I had pictures of Wolf Blitzer, Anderson Cooper, Joe Scarborough, James Carville (who actually posed for me!), Katie Couric, Charles Gibson, some woman from Fox News whose picture I ended up deleting, Dan Rather, John Kerry, Jesse Jackson, Jr., Claire McCaskill, Ted Kennedy, Caroline Kennedy, Howard Dean, Nancy Pelosi, Susan Sarandon and the main attraction and one of my heroes, Michelle Obama. All in all, I was in a state of some sort of flabbergasted paralysis, and it was all I could do to keep my mouth from hanging open.

After the convention, I had the daunting task of deciding whether to attend a party hosted by the Democratic Governors Association at Elitch Gardens Six Flags, or the Rock the Vote concert. I picked Six Flags, mostly because I was curious how the combination of roller coasters and an open bar would work.

Part two will continue next week and will contain the rest of the convention.