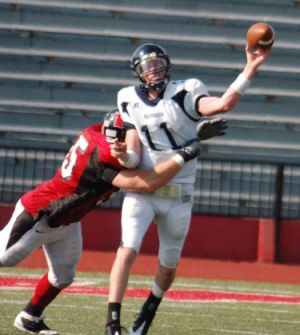 Most of the time in a 43-34 football game, either the offenses are clicking on all cylinders or the defenses are giving up more big plays than the Kansas City Chiefs.

In Washburn’s loss at Central Missouri on Saturday, neither was the case.

The game looked to be over early when the Ichabods fell behind 23-7.

A 76-yard catch and run from receiver Drameagon Powers put the Ichabods on the board in the first quarter, but with quarterback Jake Iverson alternating in and out of the game with backup Dane Simoneau, and the usually reliable Brandon Walker having an off day, the WU offense was having a hard time even staying in the game.

Then, all of a sudden, the WU offense returned to a form last seen in the win against Missouri State.

“It was our plan coming into the game that we would give Dane (Simoneau) some time on the field,” said coach Craig Schurig. “We were just sticking to the script getting him in the game.”

Powers fumbled just as the offense started moving, and the offense’s stalled drives continued from that point on.

Three first half touchdown passes from Central Missouri’s Eric Czerniewski, and a sack of Simoneau in the endzone gave the Mules their largest lead of the game.

“It hurt our pride to be out there giving up big plays like that,” said linebacker Michael Wilhoite. “We gave up too many points against Hays, and then to start off like that again hurt us.”

Similar to the second half of the 17-7 loss at Hays, things started turning around quickly for the Bods.

A week after allowing just 8 second half yards, the defense forced three consecutive three-and-outs and four punts in the third quarter.

“Our defense was key for us again in the second half,” Schurig said. “They made the stops we needed to stay in the game.”

Unfortunately for the Bods, their only third quarter points were for the other team.

UCM’s Mike Stevenson picked off an Iverson pass and returned it 34 yards for a touchdown, building the Mules’ lead to 29-14.

Iverson made up for his mistakes in the fourth quarter, scoring back-to-back touchdowns on 1-yard runs, the second of which came on a short field after Naji Shinskia blocked a punt at the UCM 20.

“We had all the momentum at that point,” said Wilhoite. “It was up to the defense to make a stop there and change the game, because the offense had done their part already.”

The Mules picked up a first down with two runs from Glenn Milner, and then put versatile wide receiver Bobby Guillory in at quarterback. He promptly ran 41 yards for a touchdown.

With 10:29 remaining, and down by 9, the Bods needed two scores to get back in the game.

Simoneau threw his first career touchdown to cut the deficit to two, but it was too little, too late for the Bods to battle all the way back.

“It’s a disappointment to lose like that,” said linebacker Bruce Ringwood. “You hate to give up so many scores in the first half that you have to battle back, but it’s our own fault.”

The loss all but eliminates the Bods from an MIAA title, but the team remains confident heading into Saturday’s home game against Missouri Western.

“We look forward to coming back and playing in front of the home crowd after these three straight on the road,” Schurig said. “But (Missouri) Western’s at the same level as these teams we just got done playing.”

The Griffons sit at the bottom of the MIAA standings, but as any one of the five ranked conference teams will point out, there are no push overs in this league.

MWSU pushed Pittsburg State to the brink of an upset last Saturday before falling 46-40, and will be looking to earn their first MIAA victory of the season against a WU team that comes in unhappy about the first third of the season.

It’s hard to call the fifth game of the season a must win, but if the Bods want to keep playoff, or even bowl, hopes alive, they have to win home games against unranked opponents.