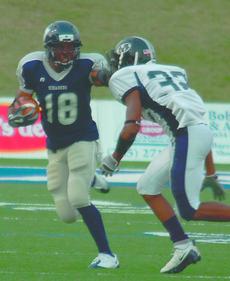 Brandon Walker scored WU's lone touchdown against Fort Hays and reached the end zone once more but the 30-yard run was erased by a penalty.

The Ichabods entered their first MIAA game of the season Saturday, coming off the high of an upset victory at Division I Championship Subdivion Missouri State.

With one of the biggest surprise victories in program history under their belts, the early stretch of conference play figured to be smooth sailing, and that was probably even an understatement against Fort Hays State, a team that finished No. 9 in the 10-team conference last year.

Instead, the Ichabods left Hays with a 17-7 loss and their odds of winning the conference reduced significantly.

“This loss hurts us, especially because it’s a conference loss,” said coach Craig Schurig. “However, if we play like we’re capable of and win the conference games we’re supposed to win, this loss won’t affect us quite as much.”

It may just be one loss, but to hang with the Pitt State’s and Northwest Missouri’s of the world, the Bods will have to finish the season with a near perfect record.

WU returned to form in the second half, but early in the game an MIAA title looked out of the question.

After exchanging punts, FHSU managed to score first in the first quarter on an 88-yard reverse play. The defensive struggle continued until the second quarter when the Bods fumbled a punt on their own 11-yard line. It didn’t take long for the Tigers to score another touchdown to bring their lead to 14-0.

Midway into the third quarter, at the 7:13 mark, Ichabod defender Zach Watkins intercepted a pass and carried the ball down to the 9-yard line of FHSU. Running back Brandon Walker pushed his way into the end zone from two yards out to cut the deficit in half.

“Defensively we played well for the most part,” Schurig said. “They got most of their yards on big plays and we need to eliminate that. But the second half we only allowed 8 total yards.”

With one big play, it appeared the defensive effort paid off and the offense finally put together the comeback they needed.

Brandon Walker broke free for a 30-yard touchdown that would have tied the game at 14, but the score was called back on a penalty, leaving the Bods too little time to make up the deficit.

Both teams swapped punts until early in the fourth quarter when the Tigers intercepted an Iverson pass and capitalized on the turnover by kicking a field goal.

Despite losing the game, the Ichabods still managed to out gain the Tigers 287 to 190 total offensive yards. The Ichabod defense also managed to hold the Tigers to a measly 46 passing yards.

Still, the big numbers didn’t amount to points or a victory against one of the MIAA’s worst.

“For next game we need to work on being more consistent and gain yards on every play, rather than get either big gains or nothing,” Schurig said.

WU’s chances were further damaged by eight penalties totaling 75 yards to go along with three fumbles. The offense was only able to produce 85 rush yards with an average of 2.8 yards per rush. QB Iverson went 16-42, a 39% completion percentage. Brandon Walker gained a modest 60 yards on 17 carries.

The story of the game was the performance of both squads’ special teams. A fumble by the Ichabods on a punt return gave the Tigers excellent field position and lead to a FHSU touchdown, and the Tigers’ fourth quarter field goal proved to be nothing more than insurance in a 10-point victory.

Despite dropping to 0-1 in MIAA play, the Bods can’t dwell on the loss for long. The team’s long road trip continues with a game at No. 22 Central Missouri on Saturday.

Many anticipated a 3-1 start for the Bods, and with a win against a ranked UCM team on the road, WU will be back on track for a strong season.

As was the case in Saturday’s loss, the Bods just have to hope it’s not too little, too late.