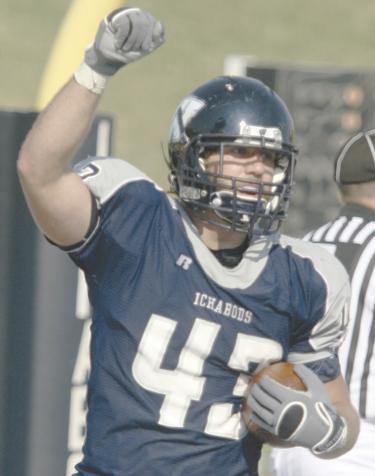 Zach Watkins performed well in the East-West Cactus Bowl, accumulating a team-high seven tackles and leading the West squad to a 16-0 victory. The East squad was limited to 121 total yards with 34 on the ground and 87 through the air accounting for 11 first downs.

Looking at the Ichabods box score from Saturday, one might wonder if the stats are wrong.

Missouri Western had twice the total offense that the Ichabods did, they held the ball longer, had more first downs and converted more times on third down.

But Washburn got the win, and the stats are right.

After the Griffons tied the game in the second quarter, linebacker Zach Watkins picked off a Drew Newhart pass, giving the Ichabod offense excellent field position once again. Iverson took the ball in himself from the 1 to put the Bods ahead 14-7.

The Griffons didn’t go quietly, however, as they put together seven drives of 30 yards or more.

The key for the Bods’ victory was the bend-don’t-break defense, which was on the field most of the game for long drives, but rarely let the yardage translate into points.

“They put our backs against the wall and we fought harder,” said Iverson. “The defense played their hearts out today and we just wanted a win.”

A field goal and a 26-yard touchdown pass for the Griffons gave MWSU their first and only lead of the game with 12:54 remaining.

On their next drive, Iverson and the WU offense drove 66 yards in 12 plays to regain the lead for good with 7:29 on the clock.

The time turned out to be the Griffons’ biggest enemy as they moved the ball downfield in the game’s final minutes.

A drive that started on the MWSU 15 was kept alive by a fourth down conversion to the WU 25.

Newhart’s 22-yard pass suddenly restored hope for the Griffons, and set up first and goal from the 3 with 6 seconds left to play.

What happened in the final 6 seconds was a microcosm of how the Bod defense played all day.

Despite spending a majority of the second half on the field, WU held its own for one last stop.

The crowd fell silent as it appeared MWSU landed in the end zone with the game-winning catch, but the referee ruled the ball hit the ground, setting up second and goal with time for one more play.

The Griffons tried a pass to Andrew Mead, but it was batted away by Beckford and fell into the arms of Watkins for his second interception in the game’s last 5 minutes.

“It’s really fitting to have two good teams, but both 0-2 in conference going at it,” said Washburn coach Craig Schurig. “We just got it done. Though we’d like to win in a more secure manner, a win is still a win and I’m really proud of the way our kids played today, they never gave up.”

The game was mainly a showdown between MWSU’s offense and WU’s defense, but when the Bod offense took the field, a few plays gave them the edge they needed.

“We started out with our short game to see what they’d give us,”said Iverson. “After a while they started backing off, so we stuck with what worked for us.”

For the second game in a row, Schurig stuck to his plan of alternating quarterbacks between Iverson, Dane Simoneau and running back Brandon Walker.

Walker ended up rushing for 106 yards, barely making up for the 38 combined passing yards from WU’s other two quarterbacks.

With the win, the Bods avoided sitting in the MIAA cellar at 0-3, but jumped into the 1-2 logjam that contains five teams ahead of MWSU.

The goal for WU now is to prove they can win on the road, and against a team with an equal record.

The Bods hit the road once again, but just for one week this time, against Missouri Southern for a 3 p.m. game Saturday at Joplin, Mo.

The Lions, who also have a 3-2 record, look to continue their winning streak after edging out Emporia State 19-18 last week.
Game Highlights