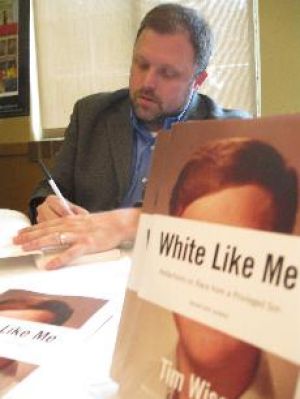 Anti-racist author and activist Tim Wise spoke at the Brown v. Board of Education National Historical Site on Wednesday.

He has visited 400 college campuses and corporations to give lectures on the fact that racism is still very active even though most people can’t see it, or refuse to see it. He is also the 9th scholar to receive the Oliver L. Brown Distinguished Visiting Scholar for Diversity Issues from Washburn.

His book “On White Privilege” covers the issues of racism and sexism. It also explains the context of Affirmative Action.

Although 1955 was the beginning of integrating schools, Wise said when he graduated in 1986 in Nashville, he was part of the first fully integrated graduating class. He said even then, civil rights were never discussed in his school, and just because there was a court ruling it did not mean racism was wiped away immediately.

Though Barack Obama is the first African-American to be backed by a major political party for the presidency, Wise said that while individual success means something, that it does not show the collective change. Such as Obama is asked if he will transcend racism, that in itself is a very racist comment.

“No one’s going to ask a white candidate if they are going to transcend whiteness,” said Wise.

Grizelda MacDonald, student at Kansas State University, said that it was very refreshing to hear Wise call America a country of apartheid, a system based on separation because of race, because she believes that’s what it really is.

“I’m not American so its eye opening to hear the history and oppression,” said MacDonald.

The auditorium at Brown v.. Board was full for the first brown bag series. After the lecture, a few questions were asked, most revolving around the presidential campaign. After his lecture and book signing, he visited Washburn to talk with students.