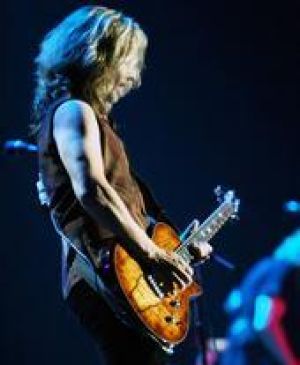 Styx: You have no idea…?Sadly, for some of you that actually means you don’t have any idea who the band Styx is. In the interest of time and length let’s just say they’re a classic rock band from the 70s and 80s who made songs like “Come Sail Away,” “Renegade,” “Blue Collar Man,” and the embarrassingly popular “Mr. Roboto.” But if you know who Styx is, or even if you’re a longtime fan you still have no idea just how well they perform. I don’t mean sing, I mean go completely and undeniably insane on stage.

It’s true that Styx, like most arena bands, has almost none of its original members, but I can almost guarantee that no one there would trade anyone that night for the original members (okay, well maybe the bassist). Lawrence Gowan, the replacement keyboard player and singer, was the highlight of the show. Not only did Gowan spend a good two and a half hours spinning and dry humping the keyboard, but the 52-year-old man would run around the stage whenever he wasn’t playing he did the most bizarre things to and around the other band members. At one point, he danced around the stage with a Polaroid camera, taking pictures of the band and holding them with his teeth until he threw them out into the audience.?

During a guitar solo he actually came up to Tommy Shaw, took the body of his guitar, and played part of the solo while Shaw held the chords. And they knew how to play to a crowd; through the entire show a little bit of everyone was waiting for “Renegade” and after they started singing “Come Sail Away.”

We figured it might not come, and after they left the stage we were sure it wouldn’t come. After they came back for an encore and didn’t play it, we had given up.

But after Shaw and Young spent a good five minutes trying to out-do each other on guitar, Shaw brought it down to a lull and just wore this little smirk on his face before?singing, “Oh mama I’m in fear for my life from the long arm of the law.” The crowd went nuts, and after screaming for more than two hours, ‘going nuts’ is really saying something.

It wasn’t until a break in the music, when Shaw mentioned seeing a man, his mother and his son as three generations of Styx fans, that it really registered with me that they had been around for that long. All of the band members, except the drummer, looked healthier and wore tighter pants than people in their twenties, and all band members, except the drummer, are in their fifties.

Styx lit up the stage with more vigor and showmanship than bands less than half their age; but when we found out they were performing in Kansas the most eager people going were the fathers of two of my friends.

Really the only difference that night between original Styx fans and their children was how often you knew the words well enough to sing along.

Kansas: I Have No Idea…?Words cannot describe what I felt when I got lost trying to get on the Topeka turnpike for two hours and missed Kansas’s entire show.

Well, they can, but they couldn’t be printed. Again, cliff notes of who the band Kansas is; “Carry On My Wayward Son” and “Dust in the Wind.” From what my friends told me about their performance, they sounded incredible, but compared to Styx’s level of showmanship they were practically statues. Throughout Styx’s entire setlist I kept thinking they would come out on stage, but they never did. The closest I got was when Shaw played one of their licks between songs.