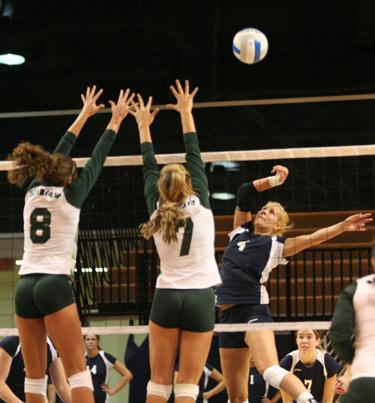 Senior Monica Miesner rises to spike the ball over two Truman State defenders. The loss was the first for the team since last season's Final Four. The Lady Blues won the next game, sending their record to 13-1.

President Harry Truman is known for his famous quote, “The buck stops here.”

Last Friday, the school that is named after the 33rd president, Truman State University, took that phrase to heart in volleyball as they ended the 12-0 season-opening run of the Washburn Lady Blues.

After falling behind 1-0, the No. 3 Lady Blues came back to take a two 2-1 lead. But they couldn’t finish TSU off in the fourth game, and so came the fifth game tiebreaker.

“It was 2-2, and we were so tired,” said sophomore Molly Smith. “We knew it was just going to be a quick game to 15, and we had a little bit of a slow start, so we ended up losing.

“I think they were a great team and can’t wait to play them again.”

On Wednesday, the Lady Blues opened up the MIAA season with their home opener against Northwest Missouri State. None of the three games were ever in doubt as the Washburn women swept the Bearcats 25-19, 25-17, 25-17.

“I think we got into the flow really well and we were excited for our first home match,” said Smith, the defensive specialist/libero. “Everyone came out really fired up, and we played well.”

The team went back on the road Saturday to play Missouri Western in St. Joseph, Mo. The match lasted four games, but the Lady Blues pulled out the victory and improved to 13-1.

“[Missouri Western is] a very scrappy team. They effectively pick up a lot of balls,” said Smith, who had 55 digs on the week, including 15 in the match against Western. “No team in our conference is going to be an easy win so it was definitely a good team to play.”

Individual leaders for the Lady Blues in the three matches last week were the usual suspects of Miesner and company, but several underclassmen made an impact as well.

Sophomore outside hitter Ashley Sheppard had 32 kills including a double-double in the match against Truman.

The three freshman combined to hit .473 with 32 kills.

Next up for the Blues is a 7 p.m. match Wednesday in Lee Arena against Nebraska-Omaha, who will play the WU for only the fourth time in school history, and the first as a member of the MIAA.

The Blues wrap up next week’s schedule at 7 p.m. on Friday against a tough Central Missouri team in Warrensburg, Mo. UCM leads the conference with a 4-0 record.