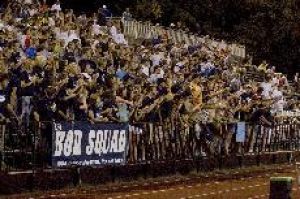 The Ichabods looked sharp in their week one victory against Colorado School of Mines in a rare Thursday night game at Yager Stadium.

The 27-3 win against the Orediggers provided many highlights for the 6,728 fans in attendance.

After months of practicing against themselves, the Ichabods were finally able to unveil their new offense to both the fans and the outmatched School of Mines.

“It takes a game or two to see what a team has,” said quarterback Jake Iverson. “We knew we were a fast, explosive team and that’s what we saw Thursday night.”

The Ichabods got on the board early, with Iverson connecting on an 11-yard strike to Brad Cole with 9:52 remaining in the first quarter.

The defense forced a missed field goal, and drove 80 yards in just seven plays to score again on a Brandon Walker 19-yard burst.

The defense held the opposition to a three-and-out, and gave the offense excellent starting position. Iverson threw his second touchdown of the night, hitting receiver Joe Hastings with a 31-yard bomb.

After already posting a comfortable 21-0 first quarter lead, the second period was scoreless until CSMU kicker Brian Harclerode booted a 32- yard field goal through the uprights with 4:39 remaining in the half.

However, any momentum the Orediggers would have had heading into the locker room was quickly stolen by the Bods with 24 seconds remaining in the half.

A 31-yard touchdown pass from Iverson to Walker turned out to be the game’s final score, as the game was called early in the fourth quarter because of lightning.

Despite ending the game nearly nine minutes early, the Ichabods managed to earn 417 yards of total offense, while the Orediggers gained only 225.

The offense scored four total touchdowns, with Iverson claiming three of them. Walker registered both a rushing and receiving touchdown. Schurig mentioned both as major contributors in the win.

The defense was equally impressive, snagging two interceptions, with Casey Curran and Xavier Beckford getting one apiece, and 2 sacks, claimed by Brandon Jackson and Ian Williams.

Michael Krajicek tallied 10 tackles along with a blocked punt, earning him a spot on the All-MIAA Defensive squad for week one.

Two noticeable things that the Ichabods have improved on since pre-season scrimmages are the consistency of their running game and the performance of the offensive line.

Ichabod running backs were able to gain 140 yards total rushing, and their big gains on the ground set up Iverson for a big day through the air.

The offensive line created holes for both the passing and running game, showing explosiveness off the line and not allowing a single sack.

“This game was a step in the right direction,” Schurig said. “The offensive line played very well. This is a game to learn from and build on.”

Shurig expected a tougher test heading into last Thursday’s game at Missouri State, but his confident attitude against an upper-division team paid off with a second nonconference victory in Springfield.

“We worry about ourselves,” he said. “[Opponents] will throw new formations at you, but we play our game and not worry so much about what the other guys are doing.”