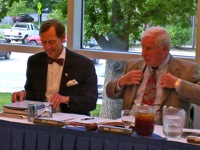 The following is a statement by Washburn University Board of Regents chairman Bob Storey on Friday regarding President Jerry Farley’s use of Washburn stationery and his title as President in a letter to a local judge. The letter asked for probation of a man sentenced for a sexual offense. The board of regents meeting began at 4 p.m., and was immediately sent into executive session sans Farley. At 4:20, Farley was called back into the room and the meeting was held in executive session until 4:27.

“The Washburn Board of Regents feels it has the duty and the obligation to address the issue of Dr. Farley’s letter, which was made public earlier this week. The content of the letter, with the personal opinions and views of Dr. Farley, are not condoned by the Board of Regents. It is unfortunate that the university is involved in this confrontation, however that matter has been addressed. Dr. Farley has publicly apologized to all and stated that it was his personal beliefs and views and not those of Washburn University. This afternoon shortly before you came in, Dr. Farley met with us in executive session and expressed his serious regrets over having used Washburn University’s stationery and his title in writing the letter requesting certain treatment of a convicted felon. I know that all of you understand that each one of us has compassion for our fellow human beings. Dr. Farley was trying to assist a loyal employee and good friend, which each of us has done or will do in the future. In doing so he expressed that they were his own personal thoughts, however, since he wrote this letter on Washburn University stationery it had the appearance of being condoned by the university. He stated that as not true, and that has been explained. Dr. Farley has been an outstanding president for Washburn University, and has done more good for this university than any other president personally I can recall in the past. I do not feel that any further action taken at this time would be necessary. Because the incident has been fully explained, it would not be necessary to try to explain it further. Dr. Farley has expressed to the board and expressed to me in lengthy discussions since this happening that in the future he will be extremely careful in any correspondence to the office, which may share his personal views, but make sure that it did not in any way reflect any of the views of Washburn University. He has agreed if there is any question to an interpretation to the correspondence which he has any doubt about, he would talk to the chair, whoever that may be, and the Board of Regents of Washburn for clearance. As stated above, the Washburn Board of Regents felt it had the obligation and duty to look into this matter, and we have. In meeting with President Farley we have determined that he has suffered this week by the actions he took, and that he will continue to suffer some of the criticism in the future. Having said all that, the board wishes to put this matter behind us, and our major goal is to go ahead and continue in our efforts in every way we can on behalf of Washburn University. As I stated earlier, this concludes all the remarks that will be made about this incident. We’re going into session, take care of business. Thank you all for coming in.”