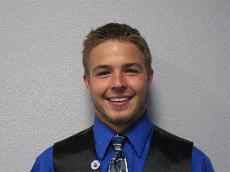 After rigorous campaigning and a stressful few voting days, the new freshmen Washburn Student Government Association Senators were sworn in this past Wednesday.

Blake Bryant comes to Washburn with experience. An Independence, Mo. Senior High graduate, Bryant was a treasurer for his school’s student council his junior year. In his senior year, Bryant became student body president at his school, helping to raise $10,000 while doing 600 hours of community service along the way.

“I just want all the students of our class to be treated equally. Regardless of if you are a transfer, you live on campus, or you live off campus, I want there to be bills passed that provide same opportunity to all the students. That’s my main goal,” said Bryant.

Paje Routhier knew ever since she came to Camp Blue at Washburn two summers ago she wanted to be part of WSGA. Routhier is a recent graduate of Andover High School. During her senior year in Andover, she was the president of her student body and also a member of student council all four years during high school. She hopes with her experience in leadership roles, she can help be a voice to her fellow freshmen and be a guiding role if one of them has an issue on campus.

Seth Froese graduated from Washburn Rural High School and was involved in Future Business Leaders of America, becoming the president his senior year and was vice president of student council his freshmen year. He knows that sometimes, freshmen can have trouble in getting their voice heard.

“I wanted to get involved with a good cause and help problems be heard. I don’t want to get into politics or anything, more just to help students get their word out,” said Froese.

Dlany Conny comes to Washburn as another close-to-home graduate. While not involved in student council in high school, Conny did feel like he was still fit to serve on WSGA. “Better the experience” is what Conny describes as something he feels he wants to do while on Senate. He sees his group of freshmen Senate members getting along as a necessity to their helping his class and the university and hopes to be involved all four years of his college experience.

Taylor McGown is ready to take on the challenge of being a freshman senator. Graduating last year from Jayhawk-Linn High School, she is ready to get involved with WSGA. McGown was president of FFA at her high school. She was also the president of Student council and her class treasurer during her senior year. McGown feels like she can be a difference maker.

“I feel like with my leadership positions, I can be a valuable asset into relaying messages around to other senate members. I’m so excited about being part of this though. I think that it’s kind of an honor to be able to hold this kind of a position,” said McGown.

These five new senate members seem to have preparation for the road ahead.