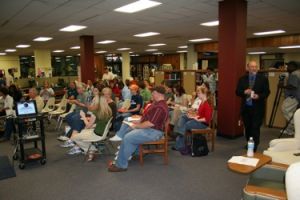 The United States is facing a vicious political maelstrom. What should be done in Iraq and Afghanistan? How will the failing economy be corrected? What is to be done about Russia and Palestine? These questions will be addressed in due time by John McCain and Barack Obama, the two nominees for president of the United States.

Mabee Library has begun hosting DebateWatch2008, a nation-wide debate watch program to inform students on the vital issues of the 2008 presidential election.

The event began at 7 p.m., Sept. 26 in Mabee Library. KTWU provided pizza and drinks for viewers. After everyone had a chance for food and drink, Barb DeSanto, chair of the mass media department, addressed the crowd on different aspects of the campaigns. She delivered a speech about the influence of the media on the political process. Speakers at future watches will include Eugene Williams from KTWU, Rachel Goossen from the history department, Leslie Reynard from the communications department and Bob Beatty from the political science Department.

After the speech, attendees were able to watch the debates on various televisions around the library. The library recently acquired three flat-screen, high-definition televisions. The event experienced technical difficulties with both sound and picture quality.

“We don’t have cable to this building,” said Alan Bearman, interim dean of libraries and coordinator for DebateWatch 2008, about the cause for the issues. “[But] it went well, we had a good turnout. It is important for students to know what is going on.”

After the debate attendees used a system of clickers to anonymously answer questions about the debate and how the candidates answered the questions. The clicker system seemed to confuse some in the audience and caused some technical difficulties with retrieving audience data after the debate.

“I enjoyed it because I can get together with fellow students and professors and get their prospective on the issues,” said Eric Budreau, Washburn student.

Mabee Library will host a debate watch for each of the upcoming president and vice president debates. The next meetings of John McCain and Barack Obama will occur on Oct. 7 and 15. Sarah Palin and Joe Biden will debate on Oct. 2 and 9. The Washburn Student Government association will be present at each debate to collect cans of food for Can Emporia.

See also Bob Beatty’s take on the big issues for the debate.