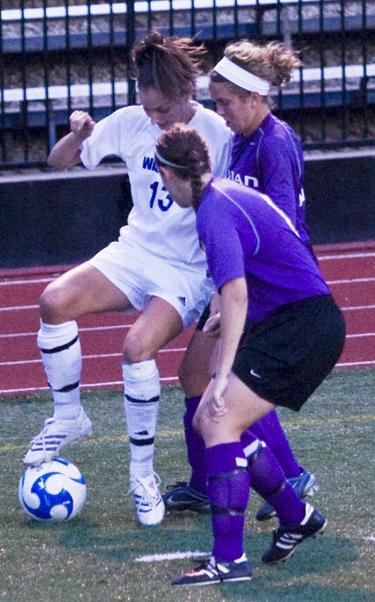 Senior Jessica Mainz works her way out of a jam as Washburn defeated Missouri Western 4-0. Mainz scored twice against the Griffons.

The Lady Blues defeated the Missouri Western Griffons in Yager Stadium on Saturday with a score of 4-0 in a display of power and dominance.

“This game is a positive step forward,” said head coach Tim Collins, who is in his sixth year at WU. “We got a lot of goals and good looks [on offense] and it was a big game for us in general.”

The Washburn offense dominated throughout the game. Freshman midfielder Lauren Henry scored first from 10 yards out in the 29th minute. She was assisted by Ashley Taylor, on her first of two assists. Though that was the only goal in the half, the Lady Blues managed to outshoot the Griffons 16-1.

The second half was a fest of excellent offensive execution. Traci Nigg scored 60 minutes into the game from 15 yards out with the assist coming from Henry.

Then Jessica Mainz took over. She scored unassisted in the 64th minute and got on the board again 12 minutes later off an assist from Nicole Tomes.

“This was one of the best games as far as execution on offense,” said Collins. “We had great offensive prowess and played according to the game plan.”

The offense for WU was undeniable, shooting 26 times and scoring four goals.

However, the defense deserves equal credit for keeping the ball out of their half of the field and giving the offense extra opportunities. MWSU shot just three times and goalkeeper Jenny Persons only had to deflect one of them.

There were many players who stepped up to the plate and became leaders against Missouri Western.

“Leadership is a big thing to me,” said Collins. “I work it into the program and teach the girls how to be leaders. By the time they are seniors, the girls have all the tools they need to be leaders for this team.”

For senior Jessica Mainz, leadership comes naturally. Ever since she joined the WU soccer program, she has been a leader both on and off the field.

She can give key advice to other players or just take the initiative and score herself.

“It’s very important for me to set an example for my teammates,” said Mainz. “The others look up to me and expect me to not be just an inspirational leader but a scoring leader as well.”

The other varsity players are warming up to the fact that they have a very talented freshman starter on their squad.

“The players accept me as a starter,” said Henry. “The seniors give me good advice and tell me to be more aggressive and their advice helped me be a better player.”

The next game for the Blues is Sept. 25 at Central Missouri in Warrensburg, Mo.