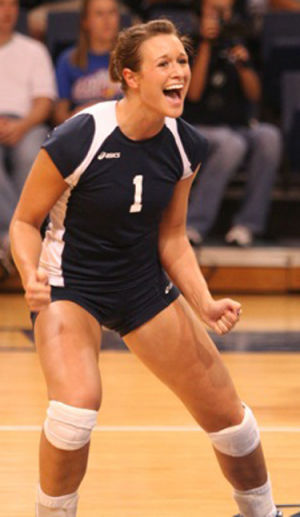 The MIAA season has finally begun for the Washburn Lady Blues volleyball team, and inevitably, so have the losses.

Even though the Lady Blues are sitting at 2-1 after a week of play, it’s likely they will pick up few more losses along the way in conference play.

Like all tough conferences, the quality teams beat each other up, and losses will come sooner or later.

In the long run, however, all of the teams improve and are more prepared for the NCAA tournament competition that follows the regular season.

There are five legitimate teams in the conference that can make a run for the title. Washburn, Emporia State, Truman, Pittsburg State and Central Missouri all have four losses or less and are ranked in the AVCA Division II Coaches Top 25 Poll.

As sophomore Molly Smith said, there is no time to take a breather once the conference schedule comes around.

“They have all been good competition. I mean no team has been an easy walk-through,” said Smith, who has played in nearly every set since she’s been on the team. “Obviously Truman is probably one of the best teams in our conference. And we have Central Missouri this Saturday, which will be a really good game.”

Although in recent years the Washburn women have had a stellar home and away record, playing at home has been an advantage. This has shown to be true for the Lady Blues in the past seven years, with the team posting a 77-12 record at home.

Smith has noticed the home-court advantage, and how difficult it was for the Lady Blues to play their first conference road match at Truman.

“I think we need to come out stronger and with more intensity on the road,” said Smith. “The difference between playing on the road and at home, hopefully we have a little more confidence playing on home court in front of our fans. I mean the Truman fans are really rowdy so that was hard to play with.”

With so many high-ranked teams in the MIAA and Washburn being at the top of the list, it puts a lot of pressure on the Washburn volleyball players.

“It’s a lot to live up to, but our team is capable of showing that we deserve to be up there,” said Smith.

The remainder of the season schedule for the Lady Blues volleyball team should be interesting with 17 of the 21 games left against conference foes.

Some big-time matches against the conference’s top team will be hosted at Lee Arena in the next few months.

At 5 p.m. on Oct. 11, WU matches up against Pittsburg State, who currently is ranks No. 16 nationally.

Nine days later, the Emporia State Hornets come to town in what usually turns out to be a heated contest.

On Oct. 24, the Lady Blues get their chance at redemption against Truman. If the five-game thriller in the first match said anything, the second match in Topeka will be just as exciting.

Finally, the Lady Blues will host Central Missouri at 7 p.m. on Halloween in what should be another great match between two of the MIAA’s best.

Just looking at the schedule gets the average fan excited for another enthralling MIAA conference season. For Smith, though, the season is just starting and nothing is going to be easy from here on out.