Student on road to legislature 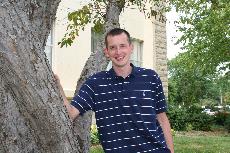 Most college students have the stigma of being apathetic when it comes to voting and actively participating in the political process.

He goes to class and spends time studying for finals. But this 27-year-old business major has found the time to squeeze in campaigning door-to-door for a seat in the Kansas House of Representatives. Shooting to represent District 57, which encompasses much of north Topeka, Gatewood has taken a less-than-traditional path, which led him to where he is now.

After graduating from high school in Blue Eye, Mo., in 1998, Gatewood went to Pittsburg State University, where he met his wife, Terica. Gatewood ended up in northeast Kansas when his wife transferred to Kansas University’s pharmacy graduate school. That’s when things started rolling.

When Terica was denied in-state tuition at KU despite being married to a state resident, owning a home and living in Kansas for three years, the two didn’t take things lightly. Rather, Gatewood pursued the issue from KU to the state board of regents, and finally to the state legislature.

“We ended up getting in-state status because of a whole conglomeration of things,” said Gatewood.

Through the entire process of working through the state legislature, Gatewood became good friends with current 14-year veteran of District 57, representative Vaughn Flora. Recently, Flora decided to step down from his position in the House because of developing health problems, and encouraged Gatewood to run for the spot.

“I liked his politics, and he expressed some interest in running when I was finished,” said Flora. “He did a bang-up job going door to door.”

Flora added he was happy to see someone young with a desire to become involved in the legislature.

Gatewood said he could best describe the entire process in a single word: tiring. Managing class work with campaigning has been a delicate balance said Gatewood, who started the semester a full-time student but has since had to drop down to three hours.

“I hope to graduate by 2020 at this point,” said Gatewood jokingly.

When Gatewood decided to break-in to the race for District 57, he had two options: to pay a $50 filing fee to get his name on the ballot, or to gather the required 300 signatures from district residents. Gatewood opted for the latter.

“It’s at least a full year of college education rolled up into a couple of months,” said Gatewood in reference to learning the nuances of learning how to run his campaign.

Going door-to-door has been the highlight of his run for the Kansas House, said Gatewood. The response he garnered was mostly one of appreciation and happiness, much akin to Flora’s feelings about Gatewood’s candidacy.

From going to local meetings to keeping as much of his business in-district as possible, Gatewood has made a real effort to know the people of the district he wants to represent. Even as brutal as it was in the Kansas summer, Gatewood rode his bike around the district, often dripping with sweat, just to meet people face-to-face.

Healthcare and economic development are two of the major issues reverberating around District 57. Citing the wind generators that were tied into the failed bill, which attempted to place a new coal plant in Holcomb, Kan., Gatewood was unhappy how the generator potential was linked with such a bill.

“We would have loved to have had that kind of wind turbine factory,” said Gatewood.

Other concerns expressed by residents which he’s been campaigning on has included lower healthcare costs.

Community volunteers have supported Gatewood’s campaign so far, something which he has greatly appreciated, but he said he could always use more help. He’s specifically looking for volunteers who have technical computer skills or people who would be willing to walk in a parade as well. Gatewood will also be part of a fundraiser for his campaign, 5:30 to 7:30 p.m., Sept. 10 at the Jayhawk Theatre, 117 SW 7th St. Gatewood said admission would be around $25 per person.
House District 57
View Larger Map