‘Blindness’ not worth seeing 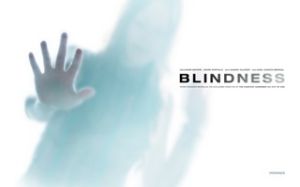 Don’t bother seeing “Blindness.” The only thing it accomplished was proving that stacking the deck with Academy Award nominees and a Nobel Prize-winning author doesn’t guarantee a good movie.

The story would have us believe a mass epidemic of an unexplained contagion is causing sudden blindness all over the world, and that the first of those effected are quarantined. Although the premise was a stretch, I suspended my disbelief the same way I do when movies have noise in space, but the plot just deteriorated. For reasons unknown, the government refuses to talk to them or give them any way to communicate. The idea that these people were kept in quarantine after it was obvious the virus could not be stopped, or that they would put away the few people who still can see to guard them, started to seem pretty unreasonable, especially when they shot a man for standing four feet out of line when he asked someone to find it for him.

I think it was supposed to be a statement about the brutality of government. But since most of these quarantined people didn’t have the patience to find a bathroom, and instead went on the floor, I can’t say I blame the guards for being a little impatient with them.

As unrealistic as the guards were, the introduction of a former unnamed bartender is outrageous. None of the characters get names because, you know, there’s no reason for blind people to need a verbal way to recognize other people. The bartender smuggles a gun and takes control of the building they’re being held in.

He hijacks the food rations, unopposed, because everyone is afraid he’ll shoot them, even though he was recently blinded and keeps running into things.

He then demands payment for the food rations. What good is money or jewelry with absolutely no way to spend it? If no one can leave where are they going to get more stuff to pay him with? He doesn’t know, when they run out of stuff he’ll just rape some people.

Throughout this all, of course, Unnamed Optometrist’s Wife (Moore) can secretly see, a plot device more for narration and plot movement more than anything else. Eventually a violent conflict leads to the main characters’ escape into the world to find everyone is blind by now too. Then there’s some nasty business involving what felt like a scene from “Dawn of the Dead” and a really strange scene with a church where all the eyes on the windows and statues are blindfolded the movie winds down to a close.

The actors’ performances are nothing special, most of them are overdone in trying to imitate someone recently blinded. There was a pretty good performance by Alice Braga and Moore did have a few moments of decency, but the whole film just seemed to do disappointingly poor with the resources it had.

All in all, the movie probably wasn’t that bad, but all the marketing it did to make it seem brilliant just made it seem all the worse when I finally saw it.