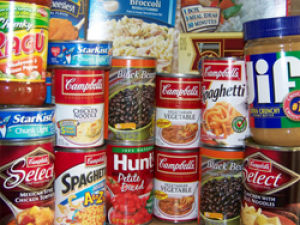 Washburn University had reason to gloat after the final results of the 2008-09 Can Emporia Drive were announced at Saturday’s homecoming football game. The Ichabods beat the rival Hornets for the second year in a row in the annual can collecting contest.

The Washburn Student Government Association declared Washburn the winner with a total of 3,460 cans raised in comparison with Emporia’s 3,258 cans collected. Though the Ichabods came out on top, there was a significant drop in the number of cans collected by both schools.

“I think a lot of it was economy,” said Erica Koepsel, WSGA public relations director. “The prices of cans rose quite a bit this year. Last year I remember buying cans for about 37 cents per can. This year it was at least 50 cents per can, making it harder to bring in more. We also lowered the amount of money that we allot for spending on Can Emporia, so we didn’t have any major events to bring in donations like last year.”

“It was rough trying to get people interested, especially with the economy the way it is,” said Philippi. “People are really having to think about what they donate to and it is a month long process, making it difficult to organize.”

Despite the drop in donations for this year’s drive, WSGA feels confident about how it approached advertising and spreading awareness to the Washburn community.

“I think we hit advertising hard this year, at least to the student population,” said Koepsel. “But we need to start earlier next year and find better ways to advertise. But I think we did a good job of motivating the students and offering a lot of incentives to donate, especially in the last couple of weeks.”

Philippi said the press conference and correspondence with the community helped immensely throughout the drive.

However, there are some changes that WSGA hopes to make to encourage more participation in the future, such as re-evaluating the values of the incentives next year in order to give more away. This means if cans are more expensive, less cans will be required to receive a prize. Members of WSGA also hope to get an earlier start and continue to reach out to the Topeka community.

“More and more of the Topeka public are starting to pay attention to students and what they are doing,” said Philippi.

All donations from the Can Emporia drive will be sent to Let’s Help Inc., who will then distribute the donations to Topeka families in need.