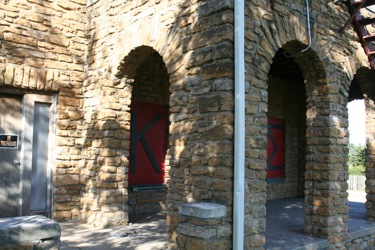 No trespassing Plagued by falling membership, the loss of their house and ultimately the revocation of their charter, the Greek house is the only remnant of Washburn's chapter of the Kappa Sigma fraternity.

The greek community has had its ups and downs over the past few years at Washburn, but members have decided now is the perfect time to band together, revamp and strengthen membership.

The fraternity Sigma Phi Epsilon sits to the northeast side of campus on 17th Street. Having been there since 1980, the fraternity is looking to a sorority house for a more updated look.

The former Kappa Alpha Theta sorority house sits on the west side of campus, facing MacVicar. It was rebuilt there after the 1966 tornado destroyed the original sorority house which was located on campus. Because of low membership numbers, Kappa Alpha Theta decided it was in their best interest to give up their house. They began formal sorority recruitment this year with only 11 active members. Sara Neiswanger, alumni board president for Theta, said less members meant more bills and burden for the actives. This made recruiting and every day life much more difficult. She said it was a progressive decision made by alumni, actives and their headquarters.

Sigma Phi Epsilon saw this as the perfect opportunity to improve housing and modernize their facility to stay competitive. Chris Howe, alumni board president for Sigma Phi Epsilon, said they hope to purchase the house by the end of this semester. First, the fraternity must face the financial challenge of actually paying for the property as well as prepare themselves for the expected expenses of owning it. The property will also be funded by alumni and the Washburn Endowment Association.

Howe said the fraternity feels it is unfortunate Kappa Alpha Theta had to come to this decision, but they hope to be able to keep the house in the greek community by purchasing it. Sigma Phi Epsilon does not have the financial means to be a part of Washburn’s future Greek Village, but needs to update to be able to compete. Howe said the Theta house is in great shape and members would be able to move in right away.

Neiswanger said members of Kappa Alpha Theta have decided to find their own personal housing and possibly host meetings in the Memorial Union.

More and more incoming freshman are living in the residence halls, and the Memorial Union is a convenient location for them.

Another fraternity, Kappa Sigma, faced challenges this year as well. They had tough times this spring with only three initiated members, as well as acting-president Grady Woodruff. They had an interest group of nine, but they needed 25 to be able to reapply for their charter. Their old house has been sitting empty on campus and they had hoped to recruit enough members to be able to eventually repurchase it from the university. Jessica Neumann, assistant director of student activities, said Woodruff graduated, and Kappa Sigma is no longer a chapter on campus.

Neiswanger said efforts have had a positive impact because all current sororities and fraternities doubled their recruitment numbers this fall.

According to the national Sigma Phi Epsilon website, www.sigep.org, it is the largest fraternity in the U.S. with more than 14,000 undergraduates and 260 established chapters. It was founded in Richmond, Va. in 1901.

Founded in 1870, Kappa Alpha Theta was the very first greek fraternity for women. According to its national website, www.kappaalphatheta.org, it has awarded $1 million in scholarships and grants every year for the past six years. It has over 125 chapters and many notable members, such as current first lady Laura Bush, who was initiated in 1966.