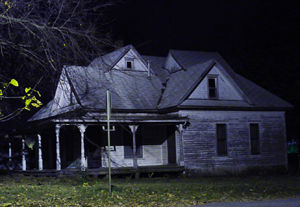 Haunted houses are a staple of Halloween entertainment, and they range in quality from wet-pants scary to falling-asleep lame, so virtually everyone who enters a haunted house leaves with some sort of crazy story to tell.

When Sherzod Kadirov, 20, visited a haunted house in Omaha, Neb., he used the situation as an opportunity to flirt with some of the ladies in his group. Kadirov said it was dark, so people were nervous and huddled close together.

“It was like a nightmare, like in horror movies,” he said. “There were vampires, but you knew it wasn’t real. It was kind of scary because it was very dark. I was holding hands with some of the girls – there were three or four in front of me and five or six behind me.”

Jonathan Sauseda, 31, recalled being frightened at a haunted house in a downtown Topeka McDonalds when he was young. He said he was absolutely terrified by several employees dressed as witches.

“I went all the way through, but I barely made it,” he said. “I was just scared for some reason.”

John Clark, 23, recounted an incident at a haunted house in a public park in California when he was about 8 years old.

“I made the mistake of bringing my childhood friend Taylor with me,” said Clark. “He was dressed as a hockey player, and he brought his hockey stick with him. Every time he got scared, he decided to beat the guys who were scaring him with the hockey stick over and over. We both got kicked out promptly.”

Personally, I remember my first voyage into a haunted house vividly. I was 10 years old, and I had promised my dad and older brother that I wouldn’t act like a coward if they let me go with them to a haunted “warehouse” in Manhattan.

Before we entered, I mentally prepared myself for what I would see: ghosts, vampires, witches and maybe even a guy dressed like Frankenstein.

My imaginings of haunted house characters were unfortunately limited to what I had seen on cartoons like “Scooby Doo.”As soon as we stepped foot into the warehouse, a chainsaw-wielding madman jumped out of the shadows, screaming that we were all going to die. My brother and dad were laughing and running around, having the time of their lives, while I sat in a corner sobbing. I was truly convinced we were going to die. Pretty soon, the “madman” turned off the chainsaw and walked over to me.

“Look, honey,” he said gently. “There’s not even a chain on this thing.”

I knew what he said was true but I couldn’t stop crying, and I had to go sit in the car. It ruined the “realistic” experience for my brother and my dad when they saw the guy with the chainsaw comforting me, and I was thoroughly and completely humiliated.

Yet somehow this incident didn’t ruin haunted houses for me, and for that I am grateful because haunted houses are as much a part of Halloween as turkeys are to Thanksgiving. Now bring on the pumpkin pie!