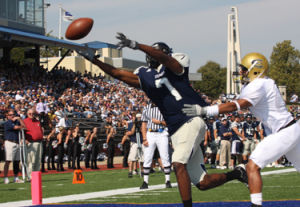 Four. That’s the number of touchdowns the Washburn offense scored Saturday against the Truman State Bulldogs in Kirksville, Mo.

In the weeks leading up to the game the offense struggled to overcome injuries, to develop a passing game and put points on the board. But Saturday the Ichabod offense was running on all eight cylinders as they came out in the first quarter and put together a nine-play, 78-yard drive that was capped off by a 36-yard pass from redshirt freshman Dane Simoneau to Drameagon Powers for the score.

Though Truman answered early in the second quarter to tie the score, the Ichabod defense buckled down and denied Truman any opportunity to get near the end zone. The Ichabod offense got the ball back with time running down in the first half and went 66 yards with freshman Justin Cooper taking the ball in for the score with 17 seconds left going into half time with a 14-7 lead.

After halftime, the Ichabods were pinned deep and in their own territory and fumbled giving the Bulldogs the ball dangerously close to the end zone and the potential to tie the game. Linebacker Zach Watkins came through big for the Ichabods as he picked off TSU quarterback Matt Ticich and ran 80 yards before getting knocked down far past the midfield stripe near the Bulldog 20.

“That was a huge play,” said Coach Craig Schurig. “Truman had great kickoff coverage and Zach had a huge key play and he could’ve gone all the way.”

The Ichabod offense again took the field, but stuttered and had to settle for a 21-yard field goal by kicker Garrett Cummings putting Washburn 10 points up on the Bulldogs. Neither team found the end zone for the remainder of the third quarter, but Washburn built big drives during the fourth quarter, resulting in two more scores as Simoneau hit tight end Cameron Knox on a 22-yard pass and Cooper took one in from the 8-yard line. Garrett Cummings accounted for both extra points. Truman scored once more, but it would be in vain because Washburn won 31-17.

“We played well,” said coach Craig Schurig. “But we still had times when we didn’t get something done. But we got things rolling in the second half and our defense did well forcing Truman to go for the field goal instead of the touchdown.”

The Ichabods racked up a total of 362 yards on the offense. Justin Cooper had his third straight 100-yard performance, ending the day with 112. Simoneau went 13-24 through the air for 233 yards, and three of his passes went more than 35 yards.

But looking to next week’s game versus top conference contender Northwest Missouri, Schurig sees areas where his team needs to improve to beat the Bearcats.

“Offensively, we need to we need to score and hold onto the ball longer,” said Schurig. “Northwest scores a lot of points and they are highly productive on offense, but if we can take away their scoring opportunities it will be a great game.”

The Ichabods currently sit at 6-2 with Northwest Missouri and Pitt State in the top two spots. The Bods will be back in action Saturday when they host the Bearcats at Yager Stadium. Kickoff is slated for 1 p.m.