No concerns at CERN 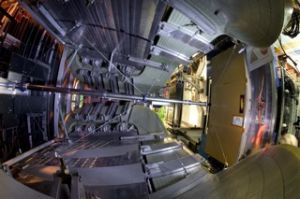 Science experiments should only be conducted under proper supervision, because accidents might result in bodily harm, death or a black hole that could gobble up the Earth. Well, at least that’s what some opponents of the Large Hadron Collider believe.

The Large Hadron Collider (LHC), located on the border between Switzerland and France, was built by the European Organization for Nuclear Research, known as CERN. According to CERN’s website, the LHC is the largest and highest-energy particle accelerator complex in the world, and it is located in an underground circular tunnel measuring 17 miles in diameter. By colliding two opposing beams of protons, scientists intend to test the Standard Model of particle physics.

Thomas said that the LHC will either confirm what is known as the Standard Model or find that something is missing from the model.

Though many are interested to see what kind of results the LHC will produce, some people have expressed concerns about the safety of the collider.

Opponents of the LHC fear the creation of microscopic black holes, or strange matter leading to a doomsday type scenario. Attempts have been made in both American and European courts to stop the experiments from going forward, but with little success.

Karen Camarda, associate professor in the department of physics and astronomy, also believes there is nothing to fear from the LHC. Though its ability to accelerate particles is an accomplishment for humans, such charged particles are naturally occurring in space and come into contact with Earth’s atmosphere without posing a threat.

“If anything bad was going to happen, nature would have already done it,” said Camarda.

Both Camarda and Thomas said there is a possibility that the LHC could produce some microscopic black holes, but those would dissipate almost instantaneously. Thomas said that those black holes would pose “virtually zero danger.”

CERN tested the machine, circulating a proton beam for the first time Sept. 10. The experiment hit a speed bump Sept. 19, when a large amount of helium leaked into the tunnel, most likely caused by a faulty electrical connection between two magnets. Repairs are estimated to take several months. CERN had already planned to shut down for the winter for obligatory maintenance, with a scheduled restart in early spring 2009.

“Science is always a game of probability,” said Thomas. “You can’t always rule something out. You can say with confidence that it is unlikely. It’s certainly not anything to stay up at night worrying about.”