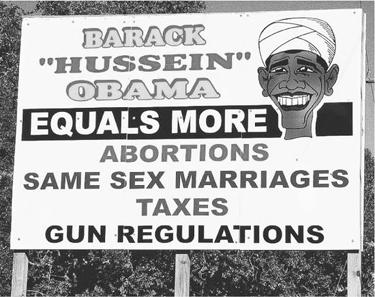 A billboard posted near West Plains, Mo. depicts presidential candidate Barack Obama with a turban, and his middle name, Hussein, in quotes. It also says that Barack “Hussein” Obama equals more abortions, same sex marriages, taxes and gun regulations. All standard arguments against the Democratic party. This billboard crosses the line between thoughtful, tasteful political discussion into the territory of racism and persecution. However, as a newspaper editorial board, we must also maintain the importance of free speech.

There are several issues wrapped up together about this sign. It is offensive and uncalled for. It makes whomever wrote it look bigoted and unintelligent. Unintelligent because if Obama is elected, there won’t necessarily be MORE abortions or MORE same sex marriages. There might be the same number. The sign is misleading and offensive, to say the least. We cannot say that the sign is completely wrong because there might be more taxes or more gun regulations. There are good ways to make arguments and poor ways to make arguments. This sign is an asinine way to make an argument.

Nevertheless, should people be without the right to say such things? If we take away that right…what is next? The United States ruled that parody is a form of democratic dialogue. Is this parody or just racist name-calling?

It is an overly offensive piece of political “speech” that may be little more than ignorant people making ignorant claims.

These people should have the right to say/depict stupid things, because the rights of free speech are imperative to a democracy.

Oh, and Missouri, here is a grammar lesson, Hussein is his ACTUAL MIDDLE NAME, no need to put it in quotes.