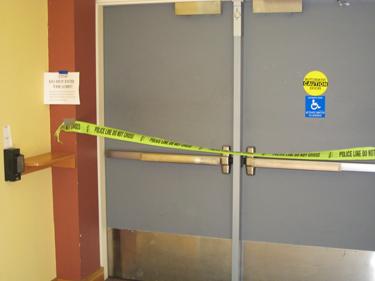 The doors that lead into the lobby where the elevator is in the Living Learning Center are taped off while authorities investigate the fire.

UPDATE: Washburn University is reporting that all 396 residents were able to evacuate the Living Learning Center without incident Saturday morning.

The fire is being investigated by the Topeka Fire Department, Washburn University Police Department, the Kansas State Fire Marshall, and the Bureau of Alcohol, Tobacco, Firearms, and Explosives. The cause of the fire has been determined to be intentional.

A fire broke out at about 5 a.m. on Saturday in the north elevator shaft of the Living Learning Center.

Authorities are investigating the incident, and Residential Assistant Angel Romero said Residential Living has posted a $500 reward for “information leading to the adjudication of anyone involved.”

No injuries have been reported.

It is still unclear how the fire started. Romero said there have been incidents in the past of students lighting elevator buttons to melt them so that they are unusable. But no connection has been confirmed between those incidents and the fire Saturday morning.

The south elevator shaft also suffered damage from the fire that caused the sprinklers to go off in the building.

Students were evacuated out of their rooms for much of the morning and were not allowed back in until around 11 a.m. Many found refuge in Stauffer Commons where free breakfast was served to accommodate the displaced residents.

President Jerry Farley even made an appearance to help students ease the woes of an eventful morning.