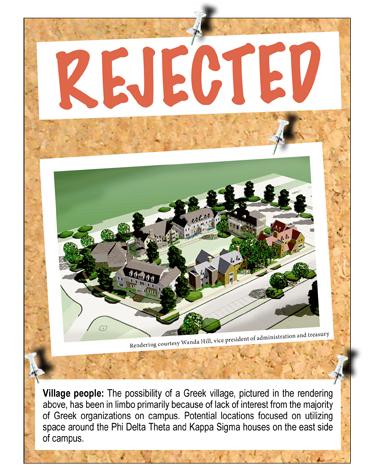 Although a few Greek houses have experienced struggles throughout the past year, the remaining houses are standing strong and have decided not to move ahead with Washburn’s Greek Village Project.

Back in 2006, a project was in the works to move the entire Greek community into one large complex, the new Greek Village, to be managed by the university. Fraternities and sororities would have left their historic homes behind, and group together in a new facility Washburn planned to build.

“It was a combination of everything,” said Jessica Neumann, assistant director of Student Activities and Greek Life. She said every chapter on campus was at a different place with housing and finances. Also, because of so many different feelings on the topic, no agreement could be reached between Washburn and the Greek community.

Clay Freeman, president of Delta Chi, said they never considered the project because of financial strains.

Freeman said the university was requiring each Greek chapter to raise $1 million to fund the Greek Village. Without enough membership dues to fund the project, it was out of the question for Delta Chi.

Delta Chi, established at Washburn in 2005, is currently the only fraternity that does not have its own house. At one time, some members were renting a house off campus next to Varsity Blues, but it was not official housing. With 23 members, they are working to build numbers to eventually be able to purchase a house.

Freeman said the only positive aspect he saw about the village was that it would be a brand new facility. It would offer competition to current residential living facilities at Washburn, such as the Living Learning Center. He said when students are shopping around at fraternities or sororities, they look at houses first, and then consider the prices and live-in policies.

“If they are all the same, it detracts from the uniqueness of going Greek,” said Freeman. If the entire Greek community were in the same building and had the same membership fees, it wouldn’t matter which house students joined. They would be all too similar.

“Houses should be separated,” said Freeman. He said when students join they want a place to call their own.

Freeman said their lack of housing has been an advantage for recruiting members because if they had a house to support they would have to raise dues, as well as live-in fees.

Neumann said the state of Greek life at Washburn is by no means facing a lot of challenges. A few houses have had bumps in the road, but the future looks bright.