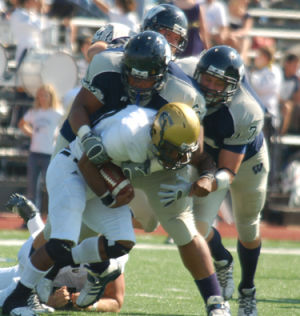 In many ways, this is the word that best describes Saturday’s homecoming game against longtime rival Emporia State, as well as the many turnovers and missed scoring opportunities.

Crazy in the way a redshirt freshman can get the green light to start at quarterback and win the homecoming game against his school’s arch-rival.

Crazy that there were more than a handful of turnovers and punts.

The Washburn offense struggled again this week to develop a passing game, despite starting redshirt freshman Dane Simoneau at quarterback. Though the Ichabods threw for more than 100 yards, something the offense hadn’t accomplished since the loss at Central Missouri, but turnovers and the lack of first downs limited the Ichabod offense to only six points in the first half, coming from Garrett Cummings field goals of 23 and 34 yards, giving WU a 6-0 lead going into halftime.

But not all was wrong with the offense. Running back Justin Cooper logged his second straight 100-yard game, finishing the day with 115, and receiver Joe Hastings had three receptions for 50 yards, including a 30 yard pass from Simoneau that helped the Bods sustain a drive resulting in a touchdown from Cooper, who ran it in from two yards out. The Bods opted to go for two after the touchdown, and were rewarded when Simoneau found receiver Drameagon Powers in the end zone, increasing the Ichabods lead to 14-0.

The Ichabod defense was looking to shutout the Hornets, but that would not come to be. Halfway through the fourth quarter, Emporia’s Andre Sloan El hit teammate Danny McEvoy for a 42-yard touchdown pass, slashing WU’s lead to just eight.

“I wish we would’ve had the shutout,” said linebacker Bruce Ringwood. “But it was one play and I can live with that. From a defensive stand point it was a great game.”

Both Washburn and Emporia each had two more drives after Emporia’s touchdown, but both teams failed to get anywhere near the opponent’s end zone.

“We struggled on offense getting into the end zone,” said quarterback Dane Simoneau. “Sometimes it seemed like we were just inches away from breaking out.”

Coach Craig Schurig also saw signs that the team was close to scoring, and was thankful the defense stepped up for a second consecutive game.

“We sputtered in important areas,” said Schurig. “But we had times when our o-line was blocking them really well and our receivers were there and we just missed them, but our defense is good and they’re buying us time for our offense to improve.”

Simoneau was named starting quarterback early last week and Saturday’s debut was his first collegiate start. He credited much of Saturday’s homecoming victory to the big guys out front.

“It feels great,” said Simoneau. “Our o-line really blocked great and they gave me plenty of time, but we need to come out a lot better if we want to continue to win. Our coaches prepare us well for what we’re going to see. It’s just up to us to get out there and get it done.”

After Saturday’s win, the Ichabods are only three victories away from tying the series with Emporia State, which leads the series 51-48-6.

On Saturday, the Ichabods travel to Kirksville, Mo. to play Truman State University, with kickoff scheduled for 2 p.m.

A win could move WU into the regional rankings, which were released for the first time last week. The top eight teams make the playoffs, and TSU was No. 10 before losing 45-28 to Pittsburg State last week.